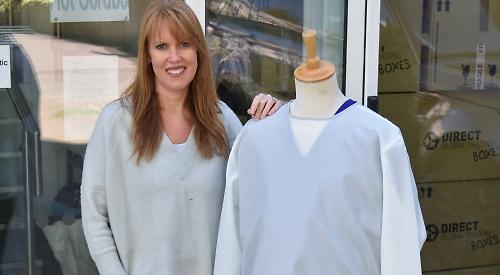 A GROUP of volunteers at Phyllis Court Club in Henley have are making 3,500 surgical gowns for doctors and nurses who are treating coronavirus patients.

The team, which has about 100 members working in shifts, hopes to make up to 240 of the garments every day at a makeshift “factory” in the club’s riverside pavilion.

These will mostly go to the Royal Berkshire Hospital in Reading as well as doctors’ surgeries in the Henley area.

Up to 30 or so volunteers are working at any one time to ensure social distancing is observed and they alternate between a morning and afternoon shift seven days a week.

They hope to hit their target within the next fortnight, after which the pavilion will temporarily close for maintenance.

The group is led by club member Kristie Shemilt, who runs blazer makers Collier & Robinson, which is based at Henley Enterprise Park, off Greys Road.

She had to close the business when the lockdown was introduced on March 23 as it is “non-essential”, so has instead been making scrubs for the hospital.

Last month she raised more than £17,000 through a crowdfunding campaign which paid for her and her volunteers to make and deliver about 1,250 pairs and 800 accompanying laundry bags.

It was so successful that the hospital approached her to make the gowns, for which its League of Friends group is paying the £27,000 cost of materials. It has also offered a small token payment to the volunteers, although many have refused it.

The gowns will be washable up to 50 times in a hot cycle, which is important as staff are in direct contact with sufferers of covid-19, so the whole batch should last about four months.

The volunteers start work at 8.30am and work for four hours before swapping with another group just before 1pm.

All their equipment, including the 23 sewing stations, is sterilised between shifts.

Among those taking part are staff from the Hart Surgery off York Road who come in when they aren’t working.

Mrs Shemilt said: “They told us they were absolutely desperate for the gowns and I think they’ve had to go round the normal procurement rules, which is fine as I’m not taking a penny.

“It has been hard work setting everything up, especially working out the rota. I started working on it the weekend before last and ended up sending it out at just after midnight on the Sunday.

“We’re absolutely exhausted but it will be worth it. They’re going to people who are helping the most seriously ill patients and they need the best possible protection.

“We’re incredibly grateful to Phyllis Court Club for the use of the premises, which couldn’t be better as they’re spacious and light.

“It took a while to get production up to speed but we’re working much more quickly now and are finishing a gown every 10 minutes.

“We couldn’t take on some of our volunteers who were sewing the scrubs at home because they are vulnerable but others have newly joined for this project, There’s a really good atmosphere on the team. I think people are optimistic that we can hit our target and people are enjoying leaving their homes to come and work with such beautiful views over the river.”

Chris Hogan, chief executive of Phyllis Court Club, a private members’ club said: “We had no hesitation in agreeing to Kristie setting up the production line.

“Our members consider the pavilion to be the jewel in the crown of the club’s estate and they would be delighted to know it has been put to such an important use during this unprecedented emergency.”

• A nurse at the Royal Berkshire Hospital has died after contracting covid-19. Julie Masinja Edward had worked at the hospital since 2017. Her family in Zambia said she had died while “putting her life selflessly on the line for others.” They are hoping to raise £5,000 in order to support her elderly mother, who is said to have been dependent on Julie. The family said: “Julie was a kind, strong, loving and well-respected person, both in her community and by her peers. Professionally, she was a very dedicated NHS nurse. She had great attention to detail and was very thorough in her work.” Last month, Dr Peter Tun, 62, became the first member of staff at the hospital to die after contracting the virus. An investigation has been launched.