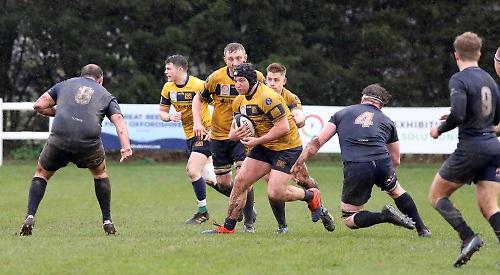 THREE Henley Rugby Club players are working for the NHS on the frontline during the coronavirus pandemic.

Prop forward George Primett, 27, is a volunteer while Megan Davies and Julia Etheridge, who are forwards for the club’s women’s side, are both nurses.

Mr Primett, who has played for the Hawks for the last five seasons, is working in the intensive care unit at the John Radcliffe Hospital in Oxford, helping patients affected by covid-19.

He is part of a team that helps turn patients on to their fronts to alleviate the build-up of fluid on the lungs, a process known as “proning”.

Mr Primett, a physiotherapist who usually works at the Nuffield Orthopaedic Centre in Oxford, explained: “Patients on a ventilator can’t move themselves, so you put them on to their front to allow them to open their airways and breathe a lot better.

“It improves their lung function and for some people that can be a really useful treatment technique.

“It’s better for the patients to be on their front overnight. They are in intensive care a week, two weeks, three weeks, and they are in one position for a long period of time so a lot of fluid and phlegm can build up. You can alleviate that by turning on your front.

“It’s a very labour intensive job — you need five or six people to do it — and having a spare pair of hands is where we come in. We identify the patients who need proning and we crack on with that to take some of the burden off the nurses.”

Mr Primett, who lives in Oxford, had no hesitation in volunteering.

He said: “Obviously, it’s something I can do quite well. Some people have got families at home or if they have a medical history themselves, like asthma, they may be a bit more hesitant to step up.

“But I’m relatively low-risk so it didn’t make me hesitate. As a physiotherapist I naturally want to help people — it’s what I do.”

He wears multiple layers of gowns and gloves as well as a full mask with respirator while at work.

“I’m not putting myself unnecessarily at risk,” said Mr Primett. “I think the minor increased risk is worth the benefit of being able to help. On a personal level, is it quite satisfying and it’s almost quite humbling to be in a position to help. It’s almost like a duty.

“There’s quite a large team of us and between us we provide an everyday service. We share the load across seven days.”

Mr Primett had been busy calling his patients from the orthopaedic centre, as they were unable to attend, but said this could be done by someone else, enabling him to work on the frontline.

“Some physiotherapists are naturally based in intensive care so it’s not the first time I’ve been there. When you do the physio training, you get exposed to it.

“We’re just doing this until we’re not needed anymore. There’s a real team ethos and everyone’s working really hard and happy to do it because we know our work is really vital at the moment.”

The Hawks’ season was brought to an early end in March because of the coronavirus pandemic, with the team sitting fourth in their league.

Mr Primett said this was an anti-climax but he was proud of the club’s performances.

Megan Davies, a prop who has played for Henley for three seasons, is a nurse working in end-of-life care at the Sue Ryder Duchess of Kent Hospice in Reading.

Her job involves ensuring patients are comfortable and peaceful, helping with their personal care, making sure they have the correct medication and offering family support.

Miss Davies, 25, from Caversham, started the job in February but then broke her wrist during a match against Novocastrians the same month and only returned to work at the end of April.

During her enforced break, things have changed dramatically. She said: “It’s very hard because a lot of patients aren’t allowed visitors, unless it’s deemed appropriate, so it means our job is being with them as much as we can.

“I used to quite often sit with them and comfort them when needed but you can’t do that because we have to be 2m away.

“We’re very lucky in that we have got all the correct personal protective equipment and we’re following all the regulations regarding that.

“We have to wear a mask at all times and when we’re going to the different zones we have to put on a face shield and we have gloves and gowns. It’s really hot under all that but everyone is coping really well and I feel safe.

“The increased risk is not something I’m concerned about, it’s just something I’m aware of. I think if you’re working in healthcare then there’s always the possibility that you’re going to catch something from a patient.”

She said: “It’s such a lovely place to work. When I went for my interview I met a few of the team and said to myself, ‘I’m taking this job’. By the end of my time off I was so ready to go back because I think this is such an important time to be working in healthcare. I probably drive past three ‘thank you NHS’ and ‘thank you key workers’ signs on my way to work.”

She had her portrait painted by artist Peter Keegan as part of the Portraits for NHS Heroes initiative in which frontline workers around the world receive free paintings of themselves.

Miss Davies sent photographs of herself to Mr Keegan, who produced the oil painting in a few days and sent her a copy of the finished product. It is hoped an exhibition of the portraits will be held when the crisis is over.

Julia Etheridge, who also plays in the front row, is a staff nurse at the John Radcliffe Hospital.

The 22-year-old from Newbury, usually works in accident and emergency but currently spends the majority of her time in the emergency respiratory department helping patients with suspected covid-19. She and her colleagues are the first medical professionals that patients see when they arrive.

Their duties include checking each patient’s heart rate and blood pressure and carry out electrocardiogram tests and swabs.

She said: “It’s really tough knowing that we’re exposed to coronavirus perhaps more than a lot of other people. Knowing we might be bringing it back to our families is something that is often spoken about between us.

“I’ve seen patients my age who have been intubated and sent to intensive care, which is honestly scary.”

Miss Etheridge said that despite the risks, team morale was better than ever.

She has to wear a surgical mask at all times while at work, which involves shifts lasting more than 12 hours. If she is doing anything with a patient she wears gloves and an apron and repeatedly washes her hands.

On other occasions she has to wear a longer gown, three pairs of gloves, goggles, a more substantial mask and a visor.

Miss Etheridge said: “The hospital has been fantastic. The level of PPE has been very good and we have daily briefings on what we should and shouldn’t do.

“It didn’t cross my or my colleagues’ minds not to go into work. It’s our vocation, it’s our passion to be able to go and support people in some of the most vulnerable times that they will ever experience.

“Of course, everyone is missing their friends and family, the pub and rugby, of course, but there is time for that. I hope in September or October this will, hopefully, be a distant memory.”