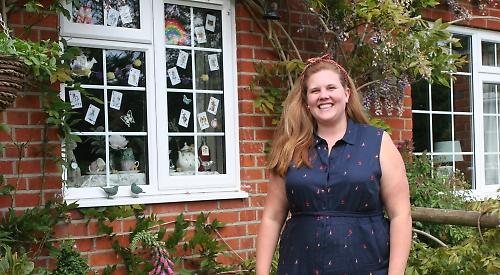 TWO women are entertaining their neighbours during the coronavirus lockdown by setting up themed displays in their front windows.

Keli Thomas and Vin Willgoss, of Heathfield Avenue, Binfield Heath, put up a new collection of items based on children’s books every two weeks.

The pair came up with the idea when Mrs Willgoss, who lives with her husband Robin, put up an Easter display to coincide with the holiday.

She works as a logistics manager but is currently between jobs and was looking for a project to keep her mind active.

Mrs Thomas, who lives with her husband Mark and is an art teacher at Shiplake College, was so impressed that she decided to follow suit with a design incorporating rabbits and trees.

Later, they chatted in the street while out for their daily walks and decided to co-ordinate their efforts.

The next display was themed around Robert Louis Stevenson’s Treasure Island, complete with treasure maps, parrots and boats. They followed this up with another based on Lewis Carroll’s Alice’s Adventures in Wonderland and the displays included playing cards, a tea set and an inflatable flamingo, a white rabbit and food and drink labelled “eat me” and “drink me”, as in the novel.

The latest displays, which go up today (Friday), are based on Eric Carle’s The Very Hungry Caterpillar while in two weeks’ time the women will be focusing on the Winnie-the-Pooh books by A A Milne.

Mrs Thomas said: “I thought it would be nice for everyone, especially children, and would spread a bit of happiness. I’ve loved seeing the smiles on people’s faces as they go past.

“I had never spoken to Vin before but I was really inspired by what she did — it gave me so much joy to see her display that I wanted to do the same.

“These are very uncertain times and it’s nice just to see something light and funny. I’ve had a lot of fun making them and I’ve mostly used items that were already lying around the house. I’ll often see people taking photos when I’m out in the front garden. They’ve said it’s fantastic and such a nice idea and some have gone out of their way to come back and see what’s changed.

“The lockdown has definitely made people think of their neighbours more and think about ways to pull together. Another neighbour has just put a book in their window with a teddy bear so hopefully the idea is catching on.”

Mrs Willgoss said: “I wanted to introduce a bit of cheer, what with everything coming to a halt and the shops all closing. Neighbours have told me it’s lovely and quite pretty.

“Some people notice more than others but it’s worth it. Adults are usually first to see it but they’ll point it out to their children, who then take a look.

“I’m ‘gainfully unemployed’ at the moment so I’m having fun putting my creative ideas into play rather than my numerical ones.

“Although there are terrible things happening, it’s good that since the outbreak started we’ve also seen a lot more kindness and people looking after each other.”