Rotarian records his version of classic song for charity 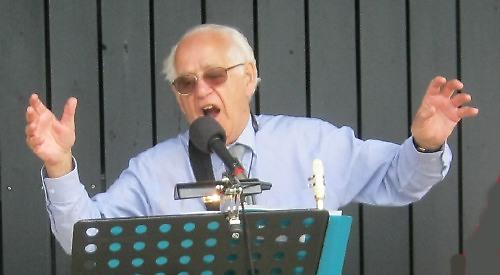 A FORMER headteacher has rewritten and recorded a classic Second World War song in an effort to raise £5,000 for Henley Rotary Club.

Ken Fitt, who worked at Chiltern Edge School in Sonning Common from 1979 until 1986, penned new lyrics to We’ll Meet Again to reflect the challenges of living under the covid-19 lockdown.

The 92-year-old and his wife Gloria, 90, are currently in self-isolation at home in Ipsden because they fear their age would put them at greater risk if they caught the coronavirus.

Mr Fitt came up with the song idea while taking part in his village’s weekly Clap for Carers gathering, where he has played the saxophone and sung popular tunes over a public address system every week,

He decided to put his own spin on Dame Vera Lynn’s classic song to mark the 75th anniversary of VE Day. It was well received by neighbours and when he discussed it with the Rotary Club, of which he is an honorary member, he was asked to record it to help raise funds.

The branch cannot hold public events because of the lockdown but needs money to support initiatives like the Henley food bank, which is run by Nomad.

Mr Fitt recorded the song at his home studio, singing the words and playing an alto sax solo over a pre-recorded backing track.

His version, which is accompanied by a video edited by Rotarian Peter Thomson, has so far raised £2,200.

Mr Fitt, who organises an annual jazz concert for Rotary, said: “I’ve always written little parodies and I was chuffed with this one.

“It’s very relevant because of the coronavirus message as well as the links to VE Day. People really are hoping that ‘we’ll meet again’ right now and they need something to give them that hope.

“The fundraising element is important because Nomad has seen an enormous increase in demand for food parcels since the pandemic broke out. We’re very pleased with the outcome so far as it will also make up for having to cancel one of the jazz concerts.”

Mr Fitt and his wife say they are coping with the lockdown but looking forward to returning to normal.

He said: “We’re so old that everyone else in the village looks after us. It’s ironic that this has made us closer as a community even though physically we have to stay apart.

“We have a large and loving family and miss them enormously. We’ve had some new great grandchildren recently and we’re having to watch them grow up on a computer screen so we can’t wait to see them in person.”

Phil Fletcher, the secretary of the club, said: “People have been very impressed by Ken’s efforts, saying what a brilliant job he’s done.”

To listen to the song or to donate, visit www.justgiving.com/
crowdfunding/henleyrotaryclub