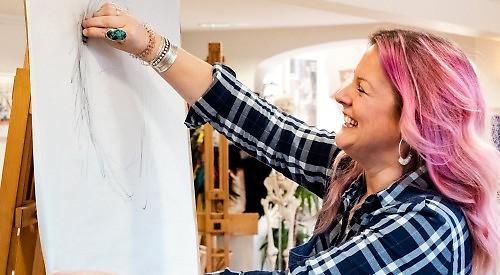 THE founder of the Henley School of Art, who feared she may lose her business due to the coronavirus crisis, says she has been given a “fighting chance” after receiving a £10,000 government grant.

Illustrator Jo Harris closed the school, which is based at The Studio, off Hart Street, in March before all non-essential businesses were ordered to shut.

She has switched to online classes in a bid to survive and offers virtual life drawing classes twice a week as well as weekly still life painting sessions.

She had feared she wouldn’t be eligible for any government support before being contacted by South Oxfordshire District Council, which is responsible for distributing the grants, asking her to apply.

Miss Harris said she had already spent half the grant to repay money she had borrowed to keep the school afloat but she would be able to continue for now.

“It means we have a fighting chance,” she said. “To keep the school open I had to pay the rates, the bills and the rent and I had to borrow money to pay those so when I got the grant I could pay that back. Now I have enough to last two more months until we’re in danger again. It has given me a real boost to have had some help. I thought I was in terrible trouble.

“I have to say it’s a temporary reprieve — we’re still slightly teetering on the precipice and I really do need people to get involved.”

Miss Harris, who started the business six years ago, said that as the pandemic took hold the wisest thing to do was shut.

She said: “A lot of our students are either of a certain age or they have young kids at home or have partners who work for the NHS. It is a group activity and it was getting to a point where people were starting to feel a little bit anxious so closing made sense.”

Her online life drawing classes are held every Monday and Thursday with almost 30 people taking part in each one.

Miss Harris said: “The effect the classes have had on people, the joy it has given them, has been unbelievable. People are really saying some very moving things.

“It’s incredibly soul-restoring seeing how many people have got on board. There are some people block booking and doing every one. Suddenly hope is restored.

“I may even continue this afterwards because some people have said, ‘I usually can’t come because of the kids’.”

Miss Harris co-ordinates the sessions from her home in Newtown Gardens, Henley, while each model is at their home with an appropriate backdrop and lighting.

The classes can be booked and paid for through the school’s website. Miss Harris sends a web link to the students so that they can access the class. The life drawing sessions are free to NHS and key workers and bursaries are also available. The painting sessions are run by artist Sue Tilbury on Tuesday afternoons. There are also plans for candle making, print making and watercolour classes.

Miss Harris said: “The thing I’m most surprised about is that online art classes could work at all.

“The idea that there’s a screen between us would normally make it impossible but it hasn’t been that way, it has been a success. It’s about making sure there’s a creative outlet for everyone who’s stuck at home. I feel much more positive about the future.”

The new format of classes has been welcomed by the participants.

Debbie Page, from Kidmore End, who took part in the first life drawing class, said: “I’m a potter so I decided, rather than try to draw, I would sculpt.

“While other people were drawing whole bodies, I was concentrating on a foot or hand or something like that.

“It was really good fun because it’s a discipline you don’t always do as much as you should once you have stopped training.

“The last time I did life sculpting was probably not far off 25 years ago so I was exercising part of my brain that was a bit on the rusty side. I think it’s a very good format. It’s different, obviously, but we have got used to different.

“At the end everyone showed their work, which was lovely so it was a very good way of not only undertaking life drawing but also including a community feel about it.”

He said: “I started life drawing at the school two years ago and I’ve been a regular attendee at the classes and unguided sessions so when it stopped I didn’t have something in the diary at least once week where I could practice.

“When Jo put these online it was great to have something regular. It’s great for keeping your hand in. In a two-hour class you get the chance to do five or six different drawings.”

She said: “I am going to do everything in my power to ensure there will be a school in the future and the minute I’m allowed to, I’m going to cuddle every customer.”