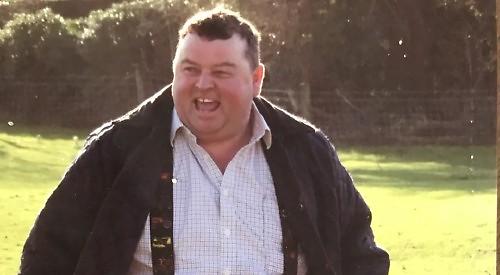 HUNDREDS of people turned out to watch a tractor procession to honour a Hambleden farmer who died suddenly.

The funeral cortege of Oliver Bowden, who had run the family business at Mill End Farm since 1993, was escorted by more than 45 agricultural vehicles as it slowly made its way from the village towards Henley on Tuesday.

From there it went on to Reading Crematorium in Caversham, where a service was held for a small group of family members.

Mr Bowden was killed in an accident involving his cattle on May 5 and died at the scene despite paramedics’ efforts to revive him. A few days later, the bells of the village church were rung specially in his memory.

This week, despite Government restrictions on mass gatherings during the coronavirus outbreak, the 56-year-old’s former friends and colleagues arrived in more than 100 cars and parked on the Henley showground off Marlow Road.

This was opened for the occasion by the Henley and District Agricultural Association, of which his mother Marion is a director.

Some remained in their vehicles or sat on top of them while others gathered along the roadside to applaud the procession and take photographs on their phones.

They were asked to observe social distancing guidelines by standing 2m apart, although some appeared to be closer together. A small number wore face masks or shields.

The cortege included both modern and vintage tractors as well as skip loaders, diggers, quad bikes and 4x4s towing trailers.

It was followed by the hearse, provided by Henley funeral director Tomalin & Son, and a number of vehicles carrying family members. To stop other vehicles from trying to overtake the procession, a supporter blocked the opposite lane of the road with a blue Porsche.

Onlookers clapped, cheered and blew hunting horns and some stepped into the road to throw flowers over the hearse.

The crowd included fellow villager Brent Levitt, who had known Mr Bowden for about 30 years.

He said: “Oliver would do anything for you — he was the most helpful person and was incredibly hard working. He worked seven days a week and was up at the crack of dawn every morning.

“You couldn’t hope to meet a nicer bloke and today’s attendance proves that. His death was a terrible shock.”

He said: “He was great to do business with and meetings in his front room were always a pleasure. He had a lovely twinkle in his eye and was generally fab so I wanted to come and pay my respects.”

Gillian Ovey, of the Hernes estate at Rotherfield Greys, where Mr Bowden grazed some of his sheep, said: “The farming community doesn’t typically make much of a splash or shout but solidarity comes to the fore when something like this happens.

“It shows how much he and his family meant to us. He was always laughing and always happy to help.”

Chris Austin, joint master of the Kimblewick Hunt, said: “Although he didn’t hunt, he was very supportive of us. Nothing was ever too much trouble and he was always so helpful and jolly. His death is an absolutely huge loss.”

Duncan Bramwell, from Hambleden, who socialised with Mr Bowden at the Stag and Huntsman pub in the village, said: “Oliver had an infectious laugh and was the kind of person everyone was drawn to.

“He loved to entertain people of all ages and we’re devastated at his death.”

Peter Langton, 73, who lives in the village and worked at Mill End Farm under Mr Bowden and his father George before that, said: “He was such a one-off that it’s hard to describe him.

“He was involved in so many things in the village and was a really nice person to work for.”

Once the parade had passed, it took about 25 minutes for supporters to leave the site and there were minor delays on the road into Henley for a short time.

Mr Bowden’s eldest child Isobel Connell, who is the fourth generation of the family to run the business, said: “We were absolutely overwhelmed by the attendance.

“It is a testament to how incredible he was and to the legacy of positivity he has left behind.”