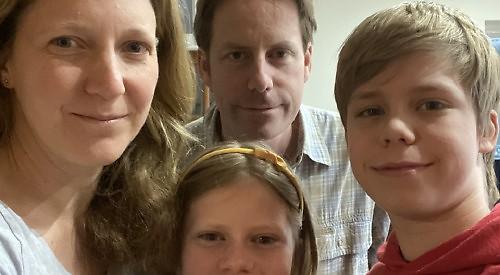 A BROTHER and sister have produced a CD to brighten up the lives of their neighbours and friends during the coronavirus lockdown.

Alex and Isabella Miles-
Kingston, of Harpsden Way, Henley, are both music scholars and decided to put their talents to good use.

Together with their parents, Charlotte and Edward, they recorded 16 songs over 10 days and then made 30 copies which they distributed among neighbours and members of the congregation at Holy Trinity Church.

Alex, 13, who is a boarder at Wellington College in Crowthorne, has grade 8 in singing, grade 7 in oboe and grade 6 in piano.

Isabella, 11, is in her final year at Rupert House School in Henley and was recently awarded a music scholarship by St Helen & St Katharine School in Abingdon, where she is due to start in September. She is grade 6 in violin and is working towards grade 5 in singing and piano.

Mrs Miles-Kingston said: “We were very aware that there are people on their own and we thought it would be nice to share the kids doing their music practice with them.

“We had seen a few reports in the Henley Standard of people doing performances and thought it would be nice to stand on the street and share the music, so we started planning a little concert.

“Then we thought it wouldn’t be responsible because of social distancing so we decided to do a CD instead.

“It is a mixture of serious music and a few songs that are more relaxed and light-hearted. There are a couple in there that the kids have been playing for a long time and others that they have only just learned.

“I got a thank you note from someone who said it brightened up their day, which is really nice and we are very proud of both of the children.

“They both get such pleasure from playing and from the social side of it as well.”

The CD, which was recorded using an iPhone, is called Miles-Kingston Music and the case features pictures of the children from previous performances. Inside there is a leaflet which explains why the family decided to make the CD and the songs they chose.

It reads: “This CD was created during the incredibly challenging time of covid-19. We wanted to provide some music for family and friends and since we are unable to perform in a concert, we thought a CD with some personal music would cheer people up, especially those who are on their own.

“We would like to thank the incredible people who are working so hard to keep everyone safe and well at this very difficult time.”

Isabella performed seven songs, including Holiday in Paris by William Gillock, Fly Me to the Moon by Bart Howard and
Millionaire’s Hoedown by Herman Clebanoff.

She also learned the Last Post on the violin and performed it in the street on VE Day outside the Acacia Lodge care home in Quebec Road for the residents, who include her great grandmother Kit.

Isabella said: “We wanted to do a concert and it was nice to be able to help the old and the vulnerable.

“I like my piano and I am planning to continue with my lessons when I am allowed. I felt very happy and joyful to get accepted for the scholarship. It feels like I am just at the start of a very exciting pathway.”

He said: “I enjoy the feeling I get from recording the pieces because I know it will bring happiness to people who are on their own. I also like the fact that we got to do it together as a family.

“I have a lot of opportunities to get involved with music at school. I have found being at home weird but I am used to it now.”

Both of them have been home-schooled during lockdown and their mother, who is an accountant, and father, an IT consultant, have been able to continue working.

Mr Miles-Kingston played the Pink Panther theme tune on the saxophone for the CD and his wife performed Yesterday by the Beatles on the piano.

The final song is called Duetto con Labradosa and is a musical nod to the family’s one-year-old Labrador Horace, which often howls while they are performing.

Mrs Miles-Kingston said: “Now that we have the music on the computer, it would be very easy for us to do more copies.

“It was only supposed to be for local families to cheer people up and lift their spirits.

“We miss family and friends and I feel desperately sorry for the shops and small businesses which are suffering at the moment, so I try to stay positive.”

If you would like to receive a copy of the CD, send a request by email to Mrs Miles-Kingston at
charlottemileskingston@sky.com