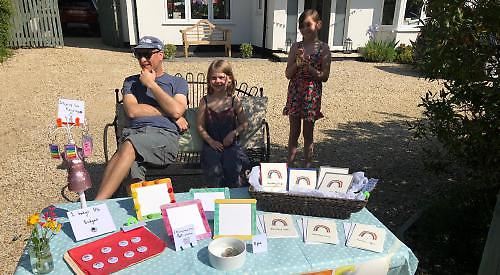 TWO sisters raised more than £175 for the NHS by selling homemade cards, key rings, photo frames and badges to friends and neighbours.

Adella Streather, 10, and Athena, seven, held the sale on the driveway of their home in Shiplake.

Their mother Eugenie, who is creative director of a luxury stationery firm, has a studio at home so the girls used her equipment and material from their craft cupboard to make the cards and illustrated them with rainbows and messages such as “love from afar”, “sending hugs” and “thinking of you”.

The badges were decorated with the slogan “In it together!” and a rainbow motif, which has become a symbol for people who want to show solidarity with NHS workers on the frontline.

The key rings were illustrated with a rainbow drawing on one side and “Thank you, NHS” written on the other. The girls set up a stall in their driveway and caught people’s attention with a sign that said “All profits go to the NHS!” and another rainbow.

They spent more than five hours outside selling the items to people passing while taking their daily exercise.

A neighbour brought out an umbrella for the girls to shield them from the strong sunshine and another made some cordial to keep them hydrated.

The girls’ parents contacted the parents of many of their friends at Shiplake Primary School, who came and chatted to them from a safe distance for the first time in weeks.

The adults bought some of the items and some paid more than the asking price to help the girls raise as much money as possible.

The cards cost £2 for a pack of three or 75p each while the key rings and badges cost 50p and photo frames £1. They sold about 20 badges, five key rings, 15 card packs and 10 individual cards and four photo frames.

Adella said the sale was Athena’s idea and she asked her to take part.

“I said ‘yes’ because I thought it was for a good cause,” she said. “I heard on the news they were running low on supplies and stuff and I thought we could raise money.

“I didn’t realise we were going to raise so much. I think it will help the NHS and if they have the money they can get more supplies and be more safe and people don’t have to die.”

She said the sale went well, adding: “Everyone was really supportive and donated a lot more than the actual prices. When everyone came it was really nice to see them because I have only seen a few of them on FaceTime but you can have a proper chat in person.”

“Some people were really kind and donated £10 when they only needed to pay £2. A lot of my friends came because lots of people in my class have older sisters in Adella’s class. It was really nice seeing them again and made me feel happy.”

Mrs Streather and her husband Tim were proud of their daughters.

She said: “They did it on their own initiative and everyone in the family was pleasantly surprised at how much they managed to raise. People were really generous.

“I think the girls felt very proud that they had managed to come up with the idea and made it happen and thrilled that their local friends and neighbours supported their efforts.”