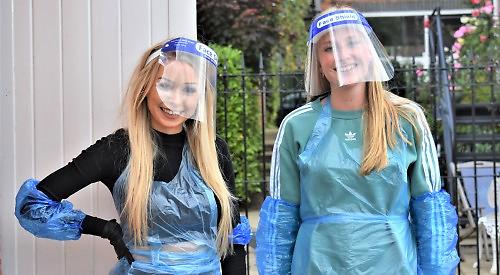 HUNDREDS of visitors flocked to Mill Meadows in Henley over the bank holiday weekend.

With temperatures reaching 24C on Monday, the riverside beauty spot filled up with families who made the most of being allowed to play, relax and socialise outdoors again.

Many said it was their first big outing since the Government put the country on lockdown on March 23 to halt the spread of the coronavirus pandemic.

Until those restrictions were eased on May 10, people could only go outside once a day for essential shopping or work, solitary exercise or an urgent health appointment and weren’t allowed to sit on grass or benches.

But in recent weeks they have been allowed to take unlimited exercise or relax in destinations further from home, play certain sports and gather in groups as long as they come from the same household.

They can also meet one friend or relative from outside the home as long as they always remain two metres apart.

On Sunday afternoon, the car park was full and visitors were gathering in family groups while maintaining the correct distance from others.

Many were enjoying ice creams from the kiosk on the towpath near the Hobbs of Henley boatyard, which had re-opened a few days earlier. Staff inside were wearing gloves, body protection and face shields, taking orders through a Perspex screen and only accepting contactless card payments.

A queuing system was set up to keep customers safely apart and staff had a fan to stay cool.

The Henley Piazza café remained closed, as did Henley Town Council’s public toilets at the Leichlingen pavilion, where signs directed customers to use the 24-hour facilities at the station car park.

Emma Wallace-Madeley, of King’s Road, who was there with her daughter Elfie, eight, said: “It’s nice to have a little more freedom and to be able to go out in the fresh air again.

“After so many weeks of lockdown it makes you appreciate all the little things, like being able to enjoy an ice cream.”

Fellow resident Becky Bowe, who was with her children Erin, 14, and Tabby, 18, said: “It’s busier than I thought it was going to be but it’s nice to see people out.

“We’re very mindful of the rules and most people we’ve seen are being cautious.”

Stef Socki, of Upton Close, Henley, who was relaxing on his boat Sea Saga, said: “The atmosphere here has changed considerably over the past week or so and it’s good to see people starting to get on with their lives again.”

Debbie Hewetson, of Lomond Avenue, Caversham, who visited with her mother Margaret, said: “When you look at the weather today, you’d expect it to be really busy but it’s not that bad so people are clearly still being a bit cautious.”

Neil Clifford, who runs the ice cream stand, said: “People are really pleased that we’re open again and it has been a good day for us. A lot are saying it’s their first day out since March.

“As a takeaway, we could have stayed open the whole time and some people were saying we should have but I felt it wasn’t morally right when the overall message was to stay at home. We didn’t want to encourage people to go against that.”

Visitors also enjoyed canoe and kayak outings on the river organised by Henley Canoe Club, which had a stand near the River & Rowing Museum, and private pleasure boats were cruising up and down the Thames.

To protect customers from infection, the canoe club only allowed four boats on the river at a time and was only accepting pre-booked journeys while staff wore gloves and enforced social distancing while queuing.

Reece Game, who helped run the stall, said: “It has been quite busy and we were out early wiping everything down before people started arriving.

“There has been huge demand and we’ve been giving out lots of information to people who couldn’t go on the river today.

“I think everyone who has wanted to book over the past few months has tried to do it at the same time, which is really encouraging and it’s a shame we had to turn some people away.

“However, restrictions are still in place and it’s better to be safe than sorry.”

Several Henley people said they didn’t want to be photographed, saying the lockdown was still an emotive issue and they feared others would criticise them for going outside.

A number of visitors had come from further afield, travelling from across the Thames valley and even west London.

A few small groups, mainly young people, appeared not to be observing the restrictions.