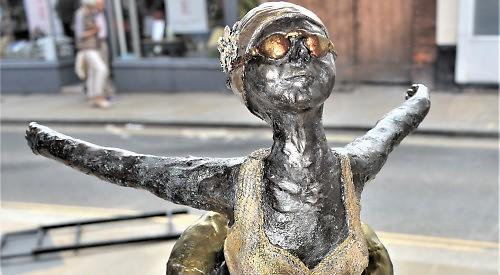 A SCULPTOR hopes to cheer up the people of Henley by installing three light-hearted artworks in a coffee shop window.

Dawn Conn’s pieces, which are themed around swimming and new hope with the easing of the coronavirus lockdown, can be viewed at Harris + Hoole on the corner of Duke Street and Hart Street.

Like all cafés and restaurants, the premises can only offer a takeaway service until July 4 at the earliest so it was happy to host the miniature exhibition.

The sculptures are available to buy and the proceeds will go to a local charity yet to be chosen.

Mrs Conn created two of them specially at her home studio in Bix, where she lives with her husband, Paul, and grown-up daughter, Courtney, as she had to cancel her plans for the summer due to the pandemic.

She usually exhibits at fixtures like the Henley Festival and the Henley Classic swim, which takes place along the royal regatta course, but these have been called off.

The first new work is Horizons, which features a woman in a bathing suit, cap and goggles who is putting her hand to her forehead to peer into the distance.

Mrs Conn designed it at home then had it rendered in steel by a welder. The second piece is Hello Sunshine, which she sculpted herself from wood reclaimed from Southampton Dock.

It shows a young girl swimmer stretching up towards the sun while standing beside her mother.

These pieces stand alongside Ready To Make A Splash, a metal sculpture made last year which depicts a woman about to dive into water with a rubber ring around her waist.

Mrs Conn, who moved to the area from Cookham last year, originally worked in tourism but retrained as an artist following a series of personal challenges more than a decade ago.

Last year she was filmed as one of the contestants for the reality show Home Is Where The Art Is, which was due to be broadcast in May but has been postponed.

Mrs Conn said: “The lockdown has been a bit of a trying time so this was my way of making the most of it.

“When I walked around the town I saw so many empty shops and thought there was a good opportunity. I enjoy working with reclaimed materials so that each piece comes with its own story. One of them was made before the lockdown and it seemed a shame to have it just lying around the house.

“Harris + Hoole were incredibly supportive of the idea, so I’m very thankful for that. They don’t know yet when they’ll be re-opening fully but the sculptures will definitely be up for the next couple of weeks and already I’ve had some lovely comments about them on social media.

“They’re all connected to the River Thames as it’s such a key part of Henley’s identity and it links in with people’s enthusiasm and hope that things will soon get back to normal.

“I want the proceeds to help the community because the lockdown has affected people very differently. Some are better off if they still had an income while spending less but others have been hit hard.”

Tammy Rooke, who manages the coffee shop, said: “They’ve proved really popular and they really sum up what Henley is about, so they add a nice touch of local character. We’re very thankful to Dawn.”