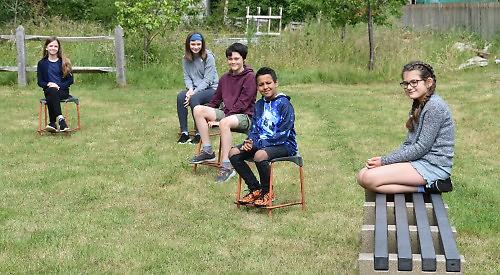 SCHOOLS in Henley may not be able to bring back every pupil until September at the earliest.

The Government has abandoned its aim of bringing all primary years back into the classroom before the summer holidays begin on July 22.

It admitted that many schools weren’t big enough to do this while observing social distancing measures to prevent the spread of coronavirus.

So far only children from nursery, reception and years 1 and 6 have been able to return but, in some schools’ cases, not all of them due to lack of space.

Many of these year groups are now back with precautionary measures such as being divided into separate “social bubbles” of no more than 15.

At Badgemore Primary School in Hop Gardens, Henley, about 70 per cent of year 6 pupils returned on June 1 while the rest were kept at home by parents. Just over three-quarters of year 1 came back last week and this week 10 reception pupils were readmitted on a trial basis. Another five could return next week.

The school brought the older children back first as they were most likely to follow social distancing. Headteacher Tim Hoskins said staffing remained a challenge as some teachers have stayed at home due to health conditions or the need to look after their own children.

He said: “We believe we’ll be hearing more from the Government in the next few days but we’ve got to be prepared for the long term and continue providing a high-quality education while keeping everybody safe.

“It’s hard to predict what will happen next as we’re always playing catch-up, which has been the challenge since the outbreak started, but we’re informing parents as soon as we receive updates. We’re approaching everything cautiously while hoping things might improve sooner than expected.

“The pupils who have returned from isolation were overjoyed to be seeing friends again, though they were a little nervous after being at home for so long. You could see it in their faces but they quickly got into the new routine and understood what was expected.

“Among those who can’t return yet, there are mixed feelings. Some parents feel confident with home learning as it has been working very well but others find it challenging and we’re doing everything we can to accommodate them.”

It is carrying out many activities on its large field behind the school as the risk of transmitting the virus is reduced outdoors.

Headteacher Beatriz Melero said she hoped to bring every pupil back at some point before the summer term ends, if only for informal activities.

In the meantime, she is surveying parents to improve online learning and help the small number who are struggling.

She said: “It’s tricky to manage because it’s such a moveable feast — you think you have everything in place then suddenly have to revise it. Our approach is based on the latest government guidance and staff availability. By proceeding carefully, we can quickly change our routines if anything crops up.

“Reception haven’t really understood social distancing but their parents understand that children will be children. The risks outdoors aren’t so great.

“We’re working on ways to bring our children back in some shape or form, even if it’s just for the afternoon, as they need to see each other. Social engagement is so important and to hear them laughing together is just magical.”

St Mary’s School in St Andrew’s Road, Henley, re-opened to permitted year groups on June 1 and most families took this up.

The independent school has staggered drop-off and pick-up times as well as breaks and lunch to prevent the “bubbles” of pupils from mixing.

A spokeswoman said: “We don’t yet know when other classes might be able to come back as it could be difficult to achieve while keeping the 2m distance.

“Not everyone who can come back has done so for a variety of reasons but it’s lovely that the school is full of the children’s noise, laughter and energy again.

“We’re still offering online teaching and other activities like assemblies for children who are still at home and we’ve had great feedback.”

Valley Road Primary School in Henley has welcomed back year 6 and year 1 full-time. Reception children returned part-time this week and their hours could be increased.

Headteacher Tim Coulson said he was doing everything to ensure the other years still felt like part of a community by hosting online chats and activities.

He said: “Like all schools, we’re split between those still learning at home and those now back in school. Mental health is a big concern as the longer children are away, the more they might lose their motivation.

“In countries like Denmark, the Government has talked with unions at every step to explore their concerns and explain what they plan to do next. We need that over here so parents know exactly what’s going on and feel confident that their children are safe.

“The guidance of ‘September at the latest’ is deliberately vague because they’re hedging their bets. When they said all years might return before the summer, they were giving people something to aim for but now many feel like they’ve had something taken away.”