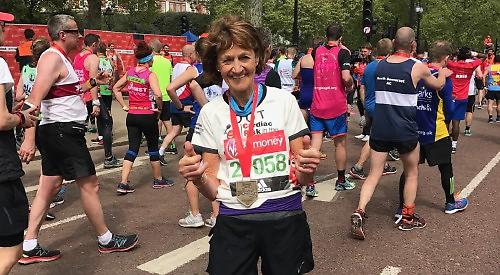 A GRANDMOTHER is running and walking the equivalent of Land’s End to John O’Groats to raise money for the NHS.

Dot Adamson, 67, began the 813-mile challenge at the start of April and is set to complete it by the end of this month.

The widowed mother-of-four has been living on her own during the lockdown at her home in Common Lane, Binfield Heath, and says the exercise has given her a focus during such a difficult time.

She said: “The whole reason is to challenge myself and keep me going through lockdown and being on my own.”

Mrs Adamson, who is a regular runner, originally wanted to run just 230 miles from Land’s End to St David’s in South Wales, where she used to regularly visit with her family.

It took almost four weeks to “reach” Pembrokeshire so she decided to go all the way to John O’Groats, which is a common route for charity fundraisers.

Mrs Adamson said: “I run anyway but it is quite casual and when lockdown happened I drifted through two weeks and had nothing to do.

“I have asthma and when I have had the flu previously I have developed horrible chest infections so I am probably a little bit vulnerable.

“I am an early morning runner and go outside as soon as it is light. I wanted to try to do something productive and it started with me running to Pembrokeshire.

“It didn’t take me that long and that is when I started the online fundraising page.

“It became clear that lockdown was going to go on for much longer and running has been good for me. It made me focus and got the endorphins going through me, which was a real boost.”

Mrs Adamson, who has so far raised £1,600 for NHS Charities Together, alternates between running and walking depending on how she is feeling.

Whenever she goes for a walk, she takes her 15-year-old dog Maggie, a Lakeland-border terrier cross.

On some days, she has run as much as 20 miles in about three hours.

Mrs Adamson said: “I am following the Google walking route, which is shorter than driving or cycling,” she said.

“At this time of the year I run off-road quite a lot. I try to vary it as much as possible so that I don’t get bored. I don’t like running along the same way that I have come.

“For safety reasons, I try to do circular routes around Binfield Heath. I recently did two 20-mile runs and one that was 18 miles, which was too much.”

Her husband Euan died in January 2008 after suffering a cardiac arrest while playing for Henley Wanderers with his son Fergus, now 31. He was 54.

Her home has been used many times to house Olympic rowers during Henley Royal Regatta, including Moe Sbihi, Andrew Triggs-Hodge and Peter Reed.

This started in 2001 when her children still lived at home and her daughter was working at regatta headquarters.

Mrs Adamson ran her first marathon in Edinburgh four months after her husband’s death in aid of Cardiac Risk in the Young, which had supported the family.

She said: “I knew that I had to do it because it was his Christmas present to me and it would have been wrong not to go ahead with it. Running as a mental health aid is amazing because it did get me through those months. I collapsed on the finish line in tears because it was an emotional thing.

“In a way, it is not that different from the current situation because you have something to focus on that pulls you through a really difficult time.”

In 2014 Mrs Adamson completed the London Marathon with Jack and they raised about £8,000 for the charity.

She is confident of achieving her latest goal, saying: “I am overdoing it and thank God I am down to the last bit.

“My body is creaking and it is not ideal for someone of my age to be doing what I am doing. My runs are getting slower because my foot is hurting.

“The weather has been beautiful. I have been running through bluebell woods and I have seen the change in the seasons.

“At the beginning of May it was just stunning in the early-morning light.”

To make a donation, visit
tinyurl.com/y96y6cux