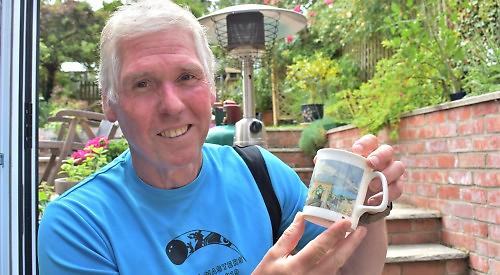 TWO artists have teamed up to sell mugs featuring a portrait of Henley Bridge in aid of the NHS’ coronavirus appeal.

The bone china cups, made by potter David Wright at his home studio in St Mark’s Road, Henley, depict the view looking back towards the town centre from the historic Grade I listed crossing.

This was painted in oils by Richard Grinter, of Marlow, whom Mr Wright knows because they both regularly exhibit their work at the town’s Dancing Teapot gallery.

Mr Grinter painted it over the course of several mornings by setting up his easel soon after sunrise, when few cars or pedestrians were about.

The finished product was photographed at high quality and given to Mr Wright in the form of a transfer which he could stick on every mug before firing it in his kiln.

He has produced 50 to start with but hopes there will be demand more as an earlier mug featuring a view of Marlow’s bridge sold well. Each will cost £10, with £5 going to the health service and the other half covering costs.

The Marlow mugs were only sold through the gallery but their Henley counterparts will be available through Mr Wright’s Instagram page.

The 66-year-old wanted to support the NHS because he and his wife Jan, 65, both caught covid-19 while on a skiing holiday in France before the national lockdown began.

The retired vascular surgeon, who also suffered a potentially fatal heart attack while playing squash at Henley Leisure Centre last year, was bed-bound for several days but recovered while self-isolating.

He has spent the lockdown enjoying walks and running and is looking forward to getting back on the water in a single scull with Upper Thames Rowing Club, of which he is a member.

Mr Wright has already raised more than £200 by staging a silent auction of his wares and selling a commemorative plate featuring a cartoon in support of the NHS drawn by Henley artist Phil Burrows.

He said: “Richard was thinkin of selling the paintings themselves for the NHS but I felt that a limited edition mug would be one way to make a bit more money for the cause.

“The Henley painting is finished so I can start production once I’ve made a sample and checked it. It’s an absolutely fantastic work which really captures a view we’re all familiar with.

“I had a rather abrupt introduction to the NHS as a patient last year and received amazing treatment, from the ambulance crews to the surgeons who installed a stent within an hour.

“The outbreak has really brought home how valuable the service is. You can never be sure that you won’t need its help and it’s fantastic to know that it’s available.”

with “richard grinter bridge painting.jpg” plus 2006179 and 180 showing Mr Wright with the earlier mug