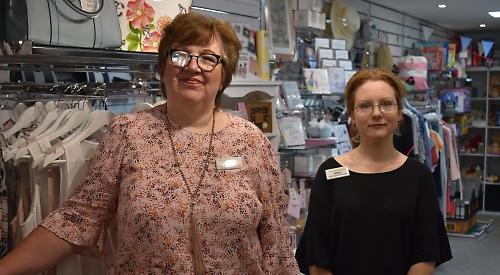 CHARITY shops in Henley have started to re-open after the Government began to ease the coronavirus lockdown.

They have lost three months of trade, which they say has badly affected the causes for which they raise money.

The Thames Hospice shop, which has been in Duke Street for more than two years, re-opened on Monday last week.

They are asked to observe 2m social distancing and there are markers on the floor and a hand sanitiser station. The fitting rooms are closed and a Perspex screen has been installed at the counter to protect the cashier.

Staff wear gloves so they can handle the stock, which includes donated clothing, accessories, books, DVDs, music, toys and homeware.

All donations are quarantined for 72 hours during which any trace of the virus dies. This also applies for any goods that are returned.

Marketing manager Hannah Bartle said: “Everyone loves being back and we really missed not being able to work.

“The staff feel happy with the safety measures in place and they’ve all received training before we re-opened with the new measures.”

She said that the charity, which supports people with life-limiting illnesses in Berkshire and Buckinghamshire, said it had lost about £800,000 of income across its 22 stores in the region.

Ms Bartle said: “It’s really important because the money we raise from the shops goes towards the care and support we give to local families. Without it we would not be able to keep our services running.”

The Oxfam book shop in Duke Street re-opened on Tuesday but its clothes shop in Market Place will remain closed until sometime next month.

It is open from 10am to 4pm on Tuesday to Saturday each week but staff ask that people telephone in advance if they plan to deliver a donation so it can be done safely.

Donations will be quarantined for 72 hours before they are placed on display.

The store, which has been based in Duke Street since 2010, has about 25 volunteers who work in shifts but it is currently being run by its two part-time paid staff and two volunteers.

Once inside they will be asked to observe a one-way system to prevent people from passing each other.

Manager Sabine Adams said: “We’re really pleased to be back because we’ve all missed the shop and customers and we love working here. It’s great to have that personal contact again. We’ve been keeping in touch with the team on WhatsApp so we didn’t lose contact with each other but obviously it’s not the same. We put in an enormous amount of work to get the shop ready to be safe, clean and welcoming for the customers.”

She added: “During the lockdown, Oxfam has lost a lot of money. We really need to get back into business. There are a lot of urgent projects that we need to support as a charity but obviously we’ve just lost lots of money.”

The Cancer Research shop in Duke Street is to re-open on Monday with three or four volunteers who will wear gloves and masks. Only four shoppers will be allowed in at once. They will be able to apply hand sanitiser on entry and must follow 2m social distancing. Donations and returns will be quarantined for 72 hours.

Manager Emily Tarrant said: “Everyone wants to come back as soon as possible as they all enjoy volunteering and working here.

“Our priority is to keep the public and volunteers as safe as possible. There are concerns for everybody but we’re looking forward to hopefully helping get Henley back and moving.”