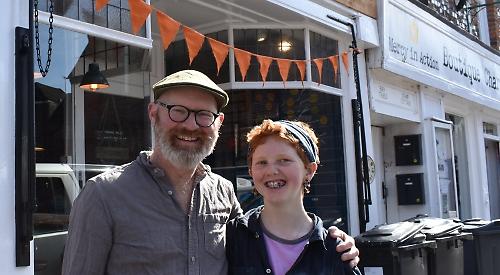 AN artist from Watlington has had a painting selected for the BP Portrait Award at the National Portrait Gallery.

Mark Draisey, 58, spent three months creating the oil on linen painting of Kitty Tait, 16, who runs the Orange Bakery in the town’s High Street with her father Alex.

The award is the most prestigious portrait painting competition in the world and this year attracted almost 2,000 entrants from 69 countries from which only 48 portraits were selected.

His work, called Kitty, The Teenage Baker, and the others selected are currently on display in the gallery’s virtual exhibition as the building itself is closed to the public due to the coronavirus pandemic. Mr Draisey, who made the final 79 in 2018, said he felt honoured to be chosen but was sad that people couldn’t see his piece in the flesh.

He said: “It’s a very nice feather in my cap but I tend to keep my feet well and truly planted on the ground, I hope it does some good in bringing in some commissions.

“I was relieved for one thing because I’ve tried for several years now. Two years ago I got to the final 79 they had whittled it down to but wasn’t selected for the exhibition.

“I’m pleased but it’s tinged with disappointment because the exhibition is not happening and this could be the last BP award for at least three years because the gallery is closing at the end of this month for a three-year refit, so I don’t know if the award is going to continue.”

Mr Draisey, who has taken part in the Portraits for NHS Heroes project, first became aware of Kitty when she “yarn-bombed” the high street by decorating it with 300 orange woollen poms-poms in January last year to advertise her first pop-up shop. She opened her own shop four months later.

He had already painted her brother Albert and had included him in a series of 12 portraits for last year’s Watlington Artweek festival. He said: “I asked if they would be interested in letting me paint her. It wasn’t a commission, this was just for my portfolio and to use for future exhibitions and competitions.

“It was very much the fact that she was so young for someone starting her own business and because she makes the bread by hand. I wouldn’t have thought of painting a 28-year-old who was opening a bakery.”

He worked from photos he had taken in the bakery.

Mr Draisey said: “It was a very technical piece because, for one, she decided she was going to wear that very floral blouse with a very tiny pattern on it. That in itself took me a week to paint.

“Then there’s the bread, which you would think is a really easy thing to paint but it’s not because the specific texture changes from one piece to another. There’s no uniformity to it. To get the bread looking natural and realistic was quite a challenge. I’m my worst critic so I’m never happy with any piece but I suppose, if I had to, I’d probably say this is one of the best pieces I’ve done.”

Kitty hung the picture in the bakery for about a month before it was submitted to the competition.