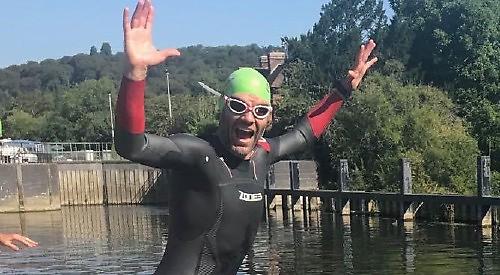 A PROFESSIONAL swimming coach from Henley is encouraging people to be responsible as they return to the water for the first time since March.

Sophie Whitworth, 49, coaches people at Swim to Live, which is based at Athlete Service in Greys Road car park, and has recently started swimming with friends again.

She is an experienced athlete, having competed and won in many local events, including the Wargrave and Henley triathlons.

Mrs Whitworth, who lives on St Andrew’s Road, said: “Because people aren’t socialising in bars and cafés there are so many more people by the river this year.

“You have to consider social distancing. I have friends that I like to swim with and with the change in restrictions I have gone from one other person, which is right for safety reasons, to a group of six.”

Mrs Whitworth recommends entering the water at Marsh Lock or near the Flower Pot hotel in Aston as these are safer locations.

She says it is important for swimmers to stay visible by wearing coloured hats and tow floats. They should also be respectful of river etiquette by understanding traffic flow and how to manage passing boats.

Mrs Whitworth said: “We generally go early at 6am to 8am rather than going out at the weekend at peak times.

“A lot of swimmers will get in and swim 100 metres without having any problems and then they come up for their first breath and that is when they start to panic. Breathing technique is a very important part of swimming.

“You want to make sure you are swimming into the stream to begin with and then come home with the stream to help you if you get tired on the way back.

“From what I have seen, everybody has been pretty good. There haven’t been excessive numbers when we go down and we have found it easy to keep apart and stay as a small group.”

Mrs Whitworth’s own competition schedule has been wiped out by the virus with events in South Africa, Finland and Norway all being postponed.

She was also hoping to take part in the Ironman World Age Group Championships in October, where she has previously ranked in the top 10 globally.

He said: “Any sort of open water swimming is dangerous and that increases if people try to do it on their own. Some of our members have been making their own arrangements and started by swimming in pairs. With the six people rule, some people are meeting up in small groups.”

The club has about 80 member but Mr Plested said they were not currently taking new members.

Steve Lodge, 63, has been a member of the club for four years and has been swimming for about a month.

He said: “On the first couple of occasions, it would just be me and my wife. She would walk on the riverbank and act as my safety cover and then eventually she got into the water to swim as well.

“It is probably one of the best forms of exercise in terms of the physical and mental health benefits. The Henley group is one of the most sociable you could come across.”

Mr Lodge has previously taken part in the Thames Marathon and crossed the Channel as part of a relay team three times. He also made a solo attempt in September 2018 but this was stopped after five hours.

He said: “To be in a position where I couldn’t go out in the water was quite unsettling. I would go out in the garden and do dry-land swimming. It was very funny to watch but it was better than nothing.

“When the Government relaxed the measures to say you could travel to exercise, I jumped at the chance to get in the water and it felt as though a weight had been lifted.”

As with other social gatherings, groups of up to six people can currently swim together, providing they stay at least 2m apart.

Swim England, the sport’s governing body, says all swimmers, or parents in the case of juniors, should sign a consent form or release waiver to say they understand the risks related to coronavirus while taking part in open water training.

Sea swimming is not currently recommended, as there are no RNLI lifeguards.