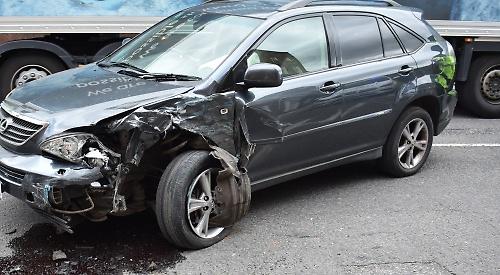 A CAR has crashed into two parked cars as well as a bus in Bell Street, Henley this afternoon (Monday).

A Range Rover Sport and Ford Focus have been left with damage to the rear of the vehicles, along with an Arriva bus, near Rupert House School.

The first had its rear bumper entirely ripped off, exposing the exhaust and electrical cabling, while the Ford has damage to its rear bumper and a dent to a rear passenger door. The bus, the 850 service to Reading, has minor damage.

Debris has been left strewn over the road.

A Lexus RX400h, which collided with the vehicles, has come to a stop in the middle of the road and cannot be moved.

The front passenger side of the car has been seriously damaged, exposing the engine, and there is oil over the road.

Police were called at 3.55pm and are still at the scene, with two PCSOs directing traffic. They are waiting for the vehicle to be recovered.