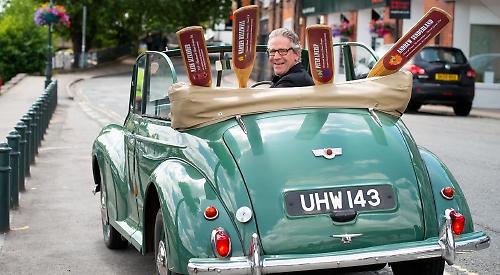 A BUSINESS owner has rewarded people in his trade for their efforts during the coronavirus pandemic with trophies.

Jolyon Marshall, a specialist recruiter in the jewellery and watch trade, will deliver four hardwood oars following a virtual awards ceremony held on the riverside in Henley.

He noticed many people were helping other people in the community after being furloughed so he invented the Henley Oarsome Awards, taking inspiration from the Boat Race.

Mr Marshall, whose base is near Hambleden, said: “It was just one of those sudden flashes of inspiration. I’m very fortunate to live and work around Henley and I’d read that the Henley Royal Regatta and other key town events had been cancelled. I thought that the various endeavours of my former candidates were all awesome in their different ways and this put me in mind of the tradition of the Boat Race with the presentation of oars to the winning crew members. I hope the Henley Oarsome Awards will never need to be repeated but isn’t it wonderful that we have all seen this through to the end?”

The award winners include Warren Halliwell, from the Midlands, who walked 100 miles in his garden to raise funds for the NHS, Peter Lintrup, from Fulham, who has worked as a temporary customer service assistant at a Tesco Express store. and Andrew Sunderland, from Yorkshire, who has made food bank deliveries.

The fourth oar will go to Mark Alexander, who operated a rail replacement bus service at Weybridge, Epsom and Dorking.