Mum to rescue after builder cuts off village water supply 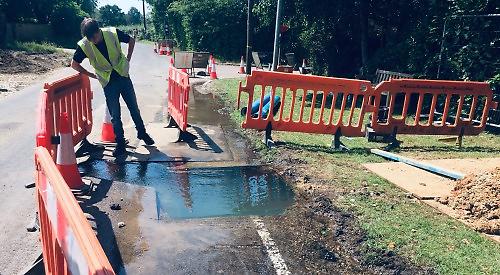 A WOMAN bought and delivered bottles of water to her neighbours after a contractor working on her new home hit a water main.

Rachel Richardson, who lives in Fosters Lane, Binfield Heath, was in her kitchen when she realised there was a problem at the building site in nearby Dunsden Way when her own water supply went off.

A worker from civil engineering and groundswork firm Redlime was using a digger to create a new sewer connection when he struck a mains water pipe.

This caused the village to be without running water for most of the day.

Mrs Richardson, an engineer who is overseeing the construction of the house, drove to Tesco in Henley with her two eldest daughters, Zoë, 18, and Jasmine, 17, to buy the water which they then delivered to as many houses as they could. “I just thought it was the reasonable thing to do,” she said. “It was so hot and I thought we really needed to do something.”

Mrs Richardson, who is married to Nigel, who works for Pepsico, and has two other daughters, Rosie, 14, and Annabelle, 12, added: “One of my daughters was filling up her bottle getting ready to start their lessons and the water just stopped.

“We went out and joined everyone else who was looking at the hole thinking ‘this isn’t very good, is it?’ and we got Thames Water out. The water was gushing out and after half an hour they hadn’t even turned the water off and I thought the supply could be off for some time.

“Initially, I went to Binfield Heath Stores and told them to put anything on account and after half an hour they had sold out of all of their water.

“We zoomed off to Tesco and a very kind lady there said she would whizz us through after we explained what had happened. We piled up three trolleys with two litre bottles and smaller bottles for older people who can’t lift them. We put a lot of them in the village shop because we know Gavin and Sharon [Caple], who run it and are super helpful and really nice. They told us where to start first and where the most vulnerable people lived. I started driving around handing out water while apologising profusely to people.”

The family went back to Tesco after the first batch had run out and were told they could not purchase any more than the six trolleys they had managed to fill. In total, they spent £130 on water.

A Thames Water tanker arrived in the afternoon to boost supplies.

Mrs Richardson, who had already delivered food supplies to her neighbours as part of the Binfield Heath covid-19 support group, added: “Once we got over the horror of cutting off the water supply, we actually had quite a nice day meeting people. We were lucky because the burst was right next to a drain and it just looked like a harmless little puddle. The water was back to normal by about 11pm for most people.

“We have lived in the village for 20 years and that is one of the reasons why I felt so bad. Everyone knows me and I know them and we know there are a lot of elderly people who live here. Everyone in the village was so nice and appreciated us bringing them water. We caught up with people we hadn’t seen in a long time and met some new people as well.

“It was just bad luck. The pipes are old and delicate and it is just one of those things. It was a digger that caused it but I think the problem was there was flint around it and the old plastic pipes are so brittle and vulnerable.”

The family are hoping to move into their bigger home by the autumn of 2021 but the project has been delayed by the pandemic.

Mrs Richardson said: “The virus has been such a divided experience, but we have actually found it quite nice. We live in such a nice place and have made the most of what has been around us.”