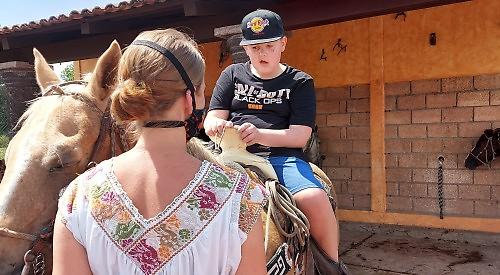 A BOY who is in Mexico with his parents for cancer treatment was caught up in an earthquake.

Charlie Ilsley, 13, of Buckingham Drive, Emmer Green, is fighting the disease for the third time since he was first diagnosed with a brain tumour in 2015. He now has tumours on his spine.

He is currently having his second week of a new form of immunotherapy treatment in Mexico City in the hope of saving his life.

On Tuesday last week, the family experienced an earthquake measuring 7.4 of he Richter scale. It struck southern Mexico at about 9.30am local time.

Mrs Ilsley said: “The earthquake was so scary. We were in our room on the sixth floor when we heard an alarm going off. We thought it was a fire alarm. We looked out of our door and a few others were looking but didn’t seem concerned so we went back in. Then the floor started moving like side to side and Charlie shouted ‘my bed’s moving’ and all the hanging lights were swinging.

“I looked at my husband Mark, who had no clue what was going on, and I said, ‘it's an earthquake’.

“We knew then that that was the siren — it gives you a minute to get out. We had to evacuate the building on the concrete stairs but it was 12 sets of five stairs and Charlie had no shoes on because you have to just get out.

“There were police helicopters and everybody was on the street and at that moment cancer and corona were nothing, I thought we were going die.” Mrs Ilsley said her son’s treatment, which he has three times a week, was going well and was expected to finish at the end of next week.

She said: “This has been the hardest six years of my life but sitting in this chair with Charlie having his fourth treatment, I consider myself so bloody blessed to have met the most wonderfully kind people. I can’t thank you enough and it makes my heart swell with love.

“Mark and I are fine. It's hard because everywhere is shut, as this is a hot spot for corona, so we can’t really go out anywhere on days off.”

The family were treated to a stay at Rancho Las Cascadas over the weekend, which is about 90 minutes from their hotel.

There they enjoyed horse riding, swimming, sunbathing and relaxing in a hot tub. Charlie also played pool. Mrs Ilsley said: “It was one of the most beautiful places I have ever been. We had such an amazing time.

“The owner invited us back for a free weekend next week, which is amazing as Charlie had the best time.”

Charlie, who currently has no symptoms, is having CAR-T cell treatment under the supervision of Dr Jason Williams, director of interventional oncology and immunotherapy at the Williams Cancer Institute, which also has branches in America and China.

The treatment is costing £25,000, which has been raised by the public and supporters.

The family want to raise a further £2,000 for a drug called Vismodegib, a type of targeted cancer drug called a cancer growth blocker.

Earlier this year, the Ilsleys were told that the chemotherapy and immunotherapy treatment that Charlie underwent had failed. Since then they have been searching for a new trial treatment. They were told Charlie was ineligible for trials at hospitals in both Memphis and Seattle and not suitable for trials in Philadelphia.

A scan in March showed the disease in his spine and elsewhere. Charlie had been receiving the drug etoposide through a reservoir inserted under his scalp in January and topotecan but these treatments have ceased as they weren’t working. After his diagnosis in 2015, Charlie underwent a 10-hour operation and had 31 sessions of radiotherapy followed by chemotherapy before being given the all-clear in March 2016.

Then in spring 2018 two tumours were discovered on his spine.

Meanwhile, Jessecco Prosecco & Pancakes, which is run by Jessica Hayes from a converted horsebox, has been raising money for Charlie’s fund.

She raised £250 from a pop-up event in Binfield Heath on Friday and will be by the village shop in Shiplake today (Friday) from noon to 8pm and at Henley Rugby Club, off Marlow Road, tomorrow (Saturday) at the same times.

Mrs Hayes, from Henley, said she would donate 50 per cent of her takings and also had a bucket for people to make donations.