No regatta? Let’s have a picnic anyway (in the rain) 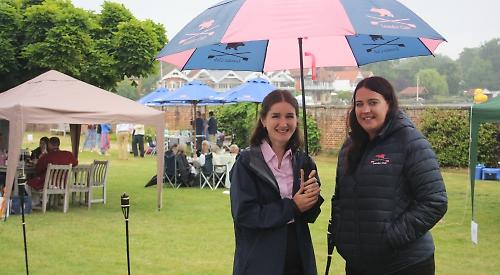 ABOUT 140 members of Leander Club in Henley celebrated Henley Royal Regatta on Saturday despite its cancellation due to the coronavirus pandemic.

They enjoyed socially distanced picnics and drinks on the club’s lawn and sheltered from the rain under parasols.

The club had encouraged them to wear traditional regatta dress and served them Leander Pink sparkling wine.

Members also enjoyed pre-booked hampers comprising a charcuterie and cheese board, sandwiches, quiche and homemade lemonade, among other treats.

They chatted to each other at tables beneath the parasols and kept to their individual bubbles in keeping with social distancing rules.

A flatscreen television had been installed outside so members could watch Henley at Home, which was broadcast on the regatta’s offical YouTube channel.

This featured classic races and interviews with rowers such as Olympic champion Mahé Drysdale, from New Zealand. At 10.30pm the members watched a fireworks display before the festivities ended around midnight.

General manager Alastair Heathcote, who has replaced Paul Budd following his retirement, said it was important to mark the regatta in some way even though it has not gone ahead this year.

He said: “It was really good and was a big deal for me as well, I suppose, because I got to actually meet people properly rather then being in stewards’ the whole time at what would have been the regatta. I’ve never been a member of Leander so this was the first time I had met some of the members.

“It was pretty important that we put something on for them, especially because it connected perfectly with the restrictions easing around pubs and restaurants.”

More pictures from the event will be published in next week’s Henley Standard.