Friends and fizz at home where royal regatta is never cancelled 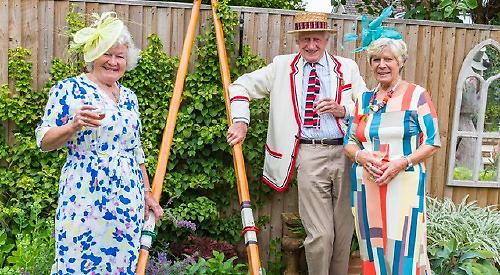 A WOMAN held a party in her back garden to get over the disappointment of not being able to attend this year’s Henley Royal Regatta.

Minnie Wilson, who lives in Nicholas Road, Henley, was upset when the annual rowing event was cancelled back in March due to the coronavirus pandemic.

The 73-year-old has been a “regatta landlady” for 40 years and she has only missed one regatta in all that time when her husband, David, died five years ago.

Mrs Wilson decided to throw a party on July 4, with Prosecco and picnic food for her 12 guests to enjoy at a socially safe distance.

Everyone turned up in their finest regatta outfits and the races from last year’s finals day were played via YouTube throughout the afternoon.

One of her neighbours, Carl Griffiths, made several signs for the occasion, which read “Henley Royal Regatta Never Cancelled” and “Champagne Bar”.

Mrs Wilson said: “Having a picnic at the regatta is always one of the highlights. The party started at 12.30pm and went on until about 6pm.

“I was incredibly sad when the regatta was cancelled, but at the time a lot of things were gradually being cancelled and it was just a matter of time.

“We were all concerned about the virus, so everyone was asked to bring their own picnic, with their own plates and cutlery. I did strawberries, chocolate brownies and meringues and provided the wine and Prosecco. We were able to space out in the garden and my conservatory and stay at a safe distance.

“It did get a little bit chilly, but it was great fun. The ladies all came in their dresses and fascinators and anyone who had a regatta badge wore those.

“We had the commentary from the races in the background, so all day we had silly comments like ‘Durham are two lengths behind Nottingham’ and we were all talking in regatta language.”

Mrs Wilson is responsible for looking after visiting crews during the regatta and has taken in many American rowers from the likes of Brown University, Dartmouth College and Trinity College.

Three of the guests at the party, Rosie Ducket, Caroline Beard and Susan Triptree, also offer up their homes to rowers and coaches.

Mrs Wilson added: “We have all been regatta landladies for about 40 years and the only regatta I have missed was the summer after my husband died and I didn’t have any crew at the house.

“Most years I have shared the crew with another house, because I am only able to put up four or five boys. If you have an eight and the coach and a few extras, it can be a team of 12 or 16 people. I sometimes share a crew with Caroline because she lives just around the corner in Elizabeth Road.

“I am a member of both Stewards and Leander. I got involved with the Stewards’ 35 years ago when one of the coaches who was staying with us suggested I join, even though I have never rowed in my life.

“My husband was an associate member of Leander and when he died I inherited his membership. I am probably the only person who is a non-rower who is a member of both.”

Her husband, who worked as a civil engineer, died of myelodysplasia. This is a type of cancer that occurs when the blood-forming cells in the bone marrow become abnormal. It leads to low numbers of one or more types of blood cells.

Mrs Wilson retired seven years ago after a career as a teacher. She specialised in helping children with dyslexia and taught at Summer Fields School in Oxford.

She has two daughters, Annabel and Lucinda, who work as a bookkeeper and teacher respectively. They both went to Sacred Heart School and would take a keen interest in the visiting crews during their childhood.

Mrs Wilson added: “In the past, we have always seemed to end up having one of the coaches staying with us and my husband loved that. We have had lots of American schools over the years.

“My husband had a very nasty fall two years before he died and he had a brain injury that he recovered from, but he was at the John Radcliffe Hospital and had a very serious operation.

“He was in a coma for a couple of weeks and as he slowly started to come around, he was saying he had been operated on by a rower.

“I thought ‘well, he has lost it’ and I mentioned it to one of the doctors. They said he was operated on by a rower called Tom Cadoux-Hudson, who was in the boat that was part of the Oxford Boat Race mutiny in 1987.

“So he wasn’t talking rubbish after all. He was operated on by one of the top brain surgeons at the time, but when he told me that I thought he had completely lost it.”