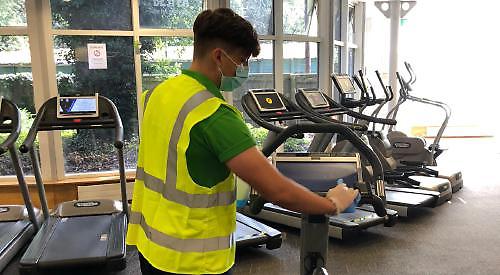 GYMS in Henley were busy when they re-opened properly on Saturday.

Members were able to take part in indoor sessions for the first time in four months.

Equipment has had to be spaced out — or removed entirely — to allow people to exercise at a safe distance and class sizes have been reduced.

Most gyms had previously been offering only outdoor fitness sessions while waiting for the Government’s permission to
re-open fully.

People visiting the gym at Henley leisure centre had to book in advance.

GLL, which operates the centre on behalf of South Oxfordshire District Council, has decided not to re-open the swimming pool until it is safe to do so.

Members have to follow one-way systems and there are hand sanitiser stations in the gym and reception area.

Classes have been moved from the dance studio into the sports hall as this allows for groups of 20 people at a time.

Customers are encouraged to disinfect equipment after they are finished but there is also a dedicated member of staff who is responsible for regular cleaning.

Centre manager Kevin Williams said: “I have worked in leisure for 23 years and Saturday was one of the best days I have ever had — it was amazing.

“We were so pleased to have customers back and they were all really positive about the things we’ve put in place. We have gone above and beyond the required standards to gain the confidence of our customers.

“We have had some suggestions about the general layout, but we don’t want to change too much too soon. The big thing is to get the swimming pool open again.

“It is early days but everyone has been really positive. We have had no complaints at all.”

Fitness Space Henley, which is based at Centenary Business Park, also welcomed members back in pre-booked slots.

The gym lost about 60 per cent of its members as a result of the pandemic but is already seeing people returning.

Joanne John, who runs the gym, said: “We had two classes on Sunday morning for yoga and spin in our new studio with UV lights, which are known for killing bacteria. On our first day, we had a pump, yoga and circuit class and all five of them were full, which is really positive. They each have eight spaces. Our classes were always really popular and we have really good quality instructors and their classes always fill up.

“The gym has been steady — by no means have we been full, or even 50 per cent, but people will come.

“The team probably worked about 14 hours on the Friday to make sure everything was sanitised. We have a small but really close team here and they’ve all been fantastic. They want it to be a success as much as I do.”

The gym will be closed between 2pm and 3pm each day to ensure equipment is thoroughly cleaned. A demister has also been bought to help purify the air.

Only 60 per cent of the maximum capacity will be allowed in the gym during the first phase of re-opening. This means 25 people can be inside with room for another eight outside.

There is tape on the floor to provide members with a designated workout area and hand sanitiser is available.

Miss John said: “On the first day, we definitely noticed a few pinch points in the area where people collect the weights and we have made some alterations and quickly adapted.

“Everybody is using the hand sanitiser as they enter, which is fantastic. The members have all been really good and are wiping down the equipment — we went through three blue rolls on the first day.”

Love Fitness Henley, which is at Henley Rugby Club in Marlow Road also had a good restart.

Massimo Antinoro, who runs the gym with his wife Johanna, said: “It has been excellent and a lot better than we expected.

“I thought it would be extremely quiet but it has actually been quite busy and we have had lots of new people join. We didn’t expect that at all.

“The gym is at an average of 30 to 40 per cent and we are happy with that initially. We are well aware that people are still a little bit wary about coming back. We would just like to see the numbers increase and a few more of our existing members come back.

“We are capable of taking a lot more as well as keeping it clean and safe. We have sprays and paper towels around the place and everyone seems to be doing their bit with the cleaning.”

Chris Preston, owner of Expert Fitness Studio in Bell Street, Henley, said: “In the first couple of days, we were back up to 65 per cent of our availability.

“We had already been delivering personal training for over a month. Members were initially worried about getting back into training but we have been taking care to bring them back gently. We have had great feedback from customers who have missed going to the gym and say how good they feel once they have been.”

Mr Preston, a former army captain, added: “The measures we have put in place have been assessed by environmental health and we have got used to them being part of the new normal.

“We all routinely use hand gel on arrival and spray all the equipment before and after the sessions.

“Going forward, we would like to see more customers supporting local businesses and now that we are able to work from home more often people have more time to unwind with a workout.”

The fitness centre and swimming pool at Phyllis Court Club, a private members’ club, off Marlow Road, re-opened on Monday but members have to book in advance to use it. The sauna is closed.

Manager Charlotte Hughes said: “The members are loving being able to come back and use the equipment again.

“It was busier than we thought it would be and some of our sessions have been fully booked.

“Because we sent out the advice in advance, people arrive and they already know what they need to do.

“It has been quite an adjustment for the staff to get used to the new cleaning regime and hopefully it will all pay off.

“A lot of our members are that bit older, so we do have to be a little bit more cautious.”