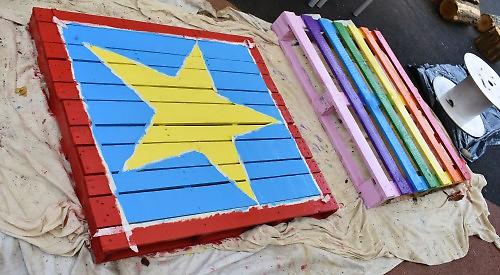 A TEACHER at Sacred Heart Catholic Primary School in Henley is appealing for donations to set up a new play area.

Avery Penna, who teaches year 1, is renovating a corner of the playground which her pupils will be confined to in September in order to comply with social distancing.

They cannot mix with children from other year groups as they have been divided into “bubbles” to limit the potential spread of covid-19.

Year 1 was allocated a bare plot with a soft patio and raised earth bed running around the perimeter, which Miss Penna and a group of parents are now making over.

They have cleared hedges to install a “music wall” using a converted pallet, seats made from tree stumps, a sandpit made from a tractor tyre and tables made from old cable reels.

Much of the material has been donated but Miss Penna needs £400 to buy fence panels and steps to create a safe access to the raised area.

Miss Avery, of Ancastle Green, Henley, has been at Sacred Heart for the past six years and her son Felix Richardson, now in year 8 at Gillotts School, attended while his younger sister Didi is currently in year 6.

Miss Avery worried her new pupils would struggle to make the leap from reception if they didn’t have a welcoming play area.

She approached parents for help about a fortnight before the summer holidays started and began the work soon after term ended.

Within 24 hours of launching her online fundraiser, she had raised about half of her £750 target.

Miss Avery said: “Some ‘bubbles’ were given well-equipped play areas but ours was almost non-existent and I knew the children would need much more. I contacted people asking if they had spare materials and had a good response as well as offers of help but we need the fencing to make it safe.

“We want to get more loose play equipment but for now it’s about getting the structure up and running and worrying about the rest later.”

Miss Avery is filming the build and shares her progress on YouTube so children have something to look forward to.

She said: “We should have it up and running by the time they come back. Hopefully, it will get them excited about coming back and reduce anxiety. I’m thankful for everyone’s support and pleased to have raised so much so quickly.”