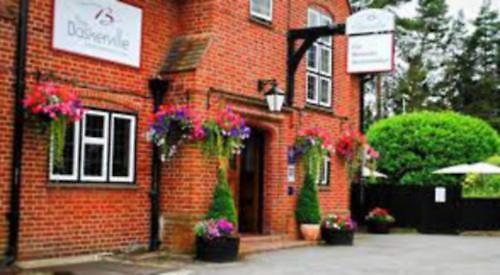 AN award-winning pub will be under new management from next month.

The Baskerville in Lower Shiplake will be run by Simon Cromack, a hospitality professional, whose parents, Graham and Mary, ran the pub for four years before retiring to Spain in 2008.

Mr Cromack, from Ashampstead in West Berkshire, will take over from Kevin and Kate Hannah on August 17.

He has been working behind the bar since the pub re-opened at the beginning of July when the covid-19 lockdown measures were eased.

The Hannahs have run the Station Road pub for almost nine years since Mr Hannah’s parents, Allan and Kathleen, handed over the lease to their son after 10 years, the last four with Mr and Mrs Cromack in charge of the day-to-day running.

The couple are moving with their children, Charlie, nine, and Esme, six, after buying the Old Black Bull in Raskelf, North Yorkshire.

The Baskerville, a free house, is owned by the Tavern Propco, and the lease has 18 years left on it.

Mr Cromack, 47, said: “Kevin has facilitated the handover and all the new developments, such as staff training for covid, are in place. He has been extremely supportive and given me advice.

“The Baskerville is a great village pub that people want to use regularly and feel at home in. It is all about creating a casual and relaxed environment with knowledgable and friendly staff — it doesn’t have to be overcomplicated, or a fine dining experience. My parents used to run the Baskerville. They also used to have the Five Horseshoes at Maidensgrove and it won Oxfordshire Dining Pub of the Year several times in a row.

“My father used to be a director of Courage Brewery. I am now the fourth generation in hospitality.”

Unlike the Hannahs who have lived on site, Mr Cromack plans to continue living at home with his wife Steff, 45, who works for the Horticultural Trade Association, and daughters Ella, 15, and Nelle, 12, and commute to the pub, staying in Shiplake two nights a week.

Mr Cromack attended Shiplake College and went on to study hotel and catering management at Westminster College. He then spent five years training with the Savoy Management Group in London.

He owns a food and drink agency, Lincoln Hospitality Studio, which an associate will run so he can devote his time to the Baskerville.

Mr Cromack said: “It is a fantastic village pub. Kevin and Kate have run it superbly well so I am coming to a place that already has success and is loved by the community.

“I am looking to give it my own layer of magic dust, so to speak, and look at ways to carry on their success while elevating the food offer. There is a lovely team here that I will be keeping on and I may bring in one or two new members of staff in the future.

“We have already put a new menu in place and it is a smaller offering because of the limitations of coronavirus and reduced team in the kitchen. It has a Mediterranean and modern British feel to it.

“The pub is currently very busy but I think that is because everyone is excited to venture out again. Whether or not it lasts remains to be seen but I am confident that with its beautiful outdoor space we can offer a safe experience for our customers.”

Mr Hannah, 46, said: “Selling the lease to Simon was the ideal thing to do because we know him and we know that he will do the village a really good service.

He took over the pub when his father became ill with a muscle wasting disorder and he died in June last year, aged 70.

Mr Hannah said: “I never had the inclination to run a pub but my dad was poorly at the time so I came down to be with the family.

“My mum and dad had never run a pub and it was actually Simon’s mum and dad who were running it on behalf of my parents. Graham and Mary moved away and it didn’t work after that. We needed someone with a personal interest so I filled the space. My dad just wanted the village to have a really nice community pub.”

Mr Hannah, who has two sons from a previous relationship living in Yorkshire, said he was sad to be leaving.

He said: “I have made so many friends over the years. It is going to be really hard to go and I will certainly miss a huge amount of people.

“When you work behind the bar, it is like a window on the world and the thing about Shiplake is it is so diverse and you have walkers, cyclists and boaters.

“People come from all over the world to what they consider to be a quintessential English inn.

Since the pub re-opened, customers have had to follow new rules. There is a one-way system through to the garden entrance and the front door of the pub is used as an exit only.

There is no drinking at the bar and drinks are taken to a station, where people can also place orders. There are about 20 tables outside, which have been spaced out to a minimum of 1.5m.

Only one person at a time is allowed in the toilets and hand sanitiser is available throughout the pub.