Old friends back in touch thanks to 100th birthdays 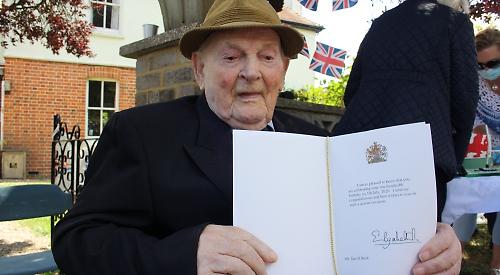 TWO friends who had lost touch made contact again after both celebrated their 100th birthdays.

Dave Beck, of Belle Vue Road, Henley, and Dick Charlton, who lives at the Chiltern Court Care Centre, off York Road, read about each other’s celebrations in the Henley Standard.

Mr Charlton, a lifelong Henley resident, enjoyed a small party at Chiltern Court with members of his family to mark his birthday on June 2.

He is thought to be the last surviving member of the Oxfordshire and Buckinghamshire Light Infantry who fought in the Second World War.

He was called up to fight when the war broke out in September 1939 and was captured in France the following year and put to work in a Nazi prison camp in Poland.

After the war, he returned to his home town and joined the Harpsden branch of the Royal British Legion. He was awarded the Henley town medal for services to the community in 2018.

Mr Beck became a centenarian on Sunday, July 5. He held a singalong outside his home attended by about 100 friends, family, neighbours and members of the congregation at St Margaret’s Church in Harpsden, which he attends.

Mr Beck moved to Henley with his family when he was five. He left school at 14 and became an apprentice fitter and turner with engineering company Stuart Turner.

During the Second World War he served in the Home Guard and later in the RAF Medical Corps. He and his wife, Joan, took over as licensees of the former Rose and Crown pub in New Street, Henley, in 1953. The pub became the family home for the next 27 years as they brought up their children, Pam, Ken and Clive.

After leaving the pub in 1980, the couple moved to Belle Vue Road and Mr Beck became head gardener and estate manager at Peelfolds in Henley.

Mr Charlton sent Mr Beck a birthday card and he returned the favour to thank him for getting in touch.

He wrote: “It was lovely to hear from you Dick and happy birthday to you from Dave, your pal.”

Mr Beck said: “I was so pleased to receive my card because we were great friends. It just said ‘happy birthday, Dave’. I would love to meet him again but, of course, you can’t at the moment because he’s in Chiltern Court.”

Mr Beck believes he first met Mr Charlton in 1928 when they were boys.

He said: “I think he went to Trinity School and I went to the National school in Deanfield Avenue, which is now The Henley College. We sort of lost touch during the war but met up afterwards and occasionally had chats.

“I should have been with Dick or been killed during the war because I was in the cadets and would have gone but I was working at Stuart Turner making munitions, which was important so I had to stay.

“We met up in the town when he came back and had a long chat together and we were so pleased to see each other again. Ever since I used to see him round and about. I really would love to see him again when this is all over.”

Mr Charlton said: “I was surprised to see Dave in the paper and I had an idea he was getting on. It’s pretty unusual for two mates to have 200 years between them.

“The last time I saw him was a few years ago when we went to the Christmas dinner at the town hall. I sat nearly opposite him and since then we’ve not had contact. It was nice to hear that he’s all right.”