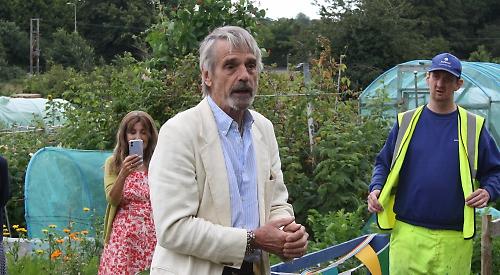 About 20 people attended the event at Waterman’s allotments.

It was organised by Autism at Kingwood, which has a 10-pole plot with 30 different plants and vegetables growing at the site off Reading Road.

Guests included the charity’s founder Dame Stephanie Shirley, Henley MP John Howell and staff from the charity, among others.

Also present was Ben Mills, a beneficiary, who spoke to the film star about the allotment.

Kate Allen, chief executive of Autism at Kingwood, explained how the charity would use its plot to provide therapy for some of the 130 adults with autism that it supports across the Thames Valley.

Irons cut a ribbon to launch the project but had to switch from a pair of shears which were not sharp enough to scissors.

He then spoke about the importance of gardening and his role as patron of the charity.