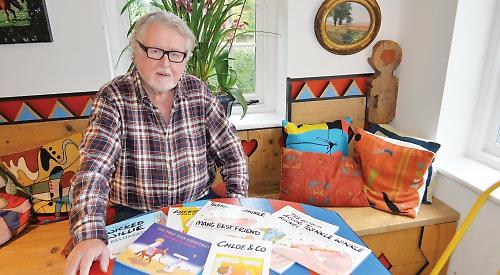 A CARTOONIST from Hambleden has paid tribute to his long-standing friend Sir Alan Parker, the acclaimed film director, who died on Friday at the age of 76.

Gray Jolliffe first met him in 1963 at the London advertising agency Maxwell Clarke, where he was working as a copywriter and art director and Parker had just joined as an office errand boy.

The newcomer was interested in the creative side of the business so Mr Jolliffe, who is best known for his Wicked Willie series and the Daily Mail’s Chloe and Co strip, helped him into a copywriting role at which he excelled.

Parker went on to direct television adverts for another agency then branched out into film, directing hits such as Bugsy Malone (1976), Midnight Express (1978), Mississippi Burning (1988) and The Commitments (1991).

He was nominated for eight Baftas, winning five, three Golden Globes and two Oscars and was made a CBE in 1995 before being knighted for services to film in 2002.

Parker, who was married twice and had five children, had been diagnosed with an undisclosed illness before his death.

He and Mr Jolliffe had remained close friends over more than five decades and they celebrated almost every New Year’s Eve together with their respective families, with whom they also enjoyed joint holidays.

Mr Jolliffe, 81, said Parker showed talent from the outset so quickly progressed in his field.

After joining Maxwell Clarke, he interviewed for a creative role at an agency owned by Peter Mayle, who later wrote the hit memoir A Year In Provence.

Parker was being paid £10 a week so he asked for a salary of “fifteen”, meaning weekly, and was shocked to be offered a contract at £1,500 per year or £30 per week.

Mr Jolliffe recalled: “He thought he’d really gone out on a limb asking for £15 a week so when he got that letter he was saying, ‘My God, I can’t justify a salary like that’. It just goes to show how long ago that was.”

The pair worked together again at Collett Dickenson Pearce, another agency, in the late Sixties and Parker began directing rough versions of TV adverts in the company’s basement.

His shorts, in which he cast friends and family as actors, were so good that clients would ask him to direct the real thing instead of hiring a production company.

At the time, union rules forbade this so he launched his own company with backers including producer David Puttnam, now Lord Puttnam, who encouraged him to go to Hollywood after he directed several films for television.

Mr Jolliffe said: “They didn’t see why they should pay someone else, which was a very valid point.

“He was so good at getting performances out of people, even when it was only a pilot.

“Once he was doing that, he realised it was what he wanted to do with his life. He became more and more successful, making these wonderful ads for Harvey’s Bristol Cream and Parker pens, then decided he wanted to do feature films.”

Parker spent about 20 years in California but never lost touch with his old friend, whom he affectionately dubbed “G-Boy J”.

Parker became known for his tough, uncompromising approach, which caused major rows while making the Pink Floyd film as he clashed with the band’s leader Roger Waters. He said it was among the most miserable experiences of his career.

Mr Jolliffe said: “Al was notorious for conflict with producers and didn’t suffer fools gladly. He was an auteur who had to have total control and just wanted to do his own thing so he would be quite cantakerous if anyone got in the way.

“I’ve been to the premiere of all his movies, which have varied in their success. Some weren’t as well received because he was an experimenter but they all came from a brilliant mind. He didn’t do straightforward stories with crooks, car chases and all that stuff.

“But he remained down-to-earth and never became snobbish or let it go to his head. He was totally accessible, unassuming and self-confident but never big-headed, even though he had every right to be.

“He was stubborn but it was about defending his artistry rather than ego. If someone offered a suggestion which he thought was an improvement, he’d gladly listen and go with it.

“He was slightly embarrassed when he got his knighthood. I phoned to congratulate him and asked, ‘Do I have to call you Sir Alan from now on?’

“He replied: ‘I’ll always be Al to you — but I can’t speak for Lady Parker’, which I thought was very funny.”

Mr Joliffe, who lives with Niki, his wife of 58 years, said Parker had a great sense of humour and was also a skilled cartoonist and painter. When they first worked together, he recalls him strapping tins of industrial glue to his feet to make himself taller in imitation of the male models who frequented their agency’s office.

He said: “Most of us wore jeans in those days but he wore these huge baggy trousers with braces which became his trademark. He always joked that he could jump up, turn in mid air and land with them back to front.

“He was a great teller of jokes and stories and we laughed a lot together, both here and in America.

“Despite being in LA, he always hated lounging in the sun — he was more of a night person.

“One time when we went over, I said we were going to the beach and he replied, ‘Why would you do that?’. We’d just flown thousands of miles but he didn’t see why we’d want to drive a few more miles to paddle in the sea.

“Al loved his wine and we had lunch at least once a month at the Chelsea Arts Club, which we would always end up falling out of.

“But he was very strict when he was working and never got addicted to anything except his creative
pursuits.

“He was surrounded by people taking cocaine in Hollywood but he frowned on it massively and would take the p*** out of addicts, which made him something of a minority.

“He drew fantastic cartoons about the realities of working in the film industry, though he always drew the speech bubbles first so the text would spill out of them. I kept telling him to leave the bubble until last but it never sank in.

“Al was a fantastic copywriter from the very beginning and also did silk-screen paintings so he was immensely creative at whatever he turned his hand to, though he was also very modest.

“Sadly, he was pretty sick last New Year’s Eve, when it was just the four of us meeting up, and I hardly saw him after that as he was on a lot of drugs and didn’t really want to meet anybody.

“It’s a great shame that I never had the chance to say goodbye but we had a lot of fun times together and I’ll miss the old b***** terribly.”

In a feature on the men’s friendship in the Independent in 1999, Parker said: “[Gray] is one of those friends for life — I’ve heard his jokes and stories a zillion times but he still makes me laugh.

“He’s very special and, as you get older, you realise you don’t meet many people like that in a lifetime.”