Seats at riverside restaurant sell out in the sunshine 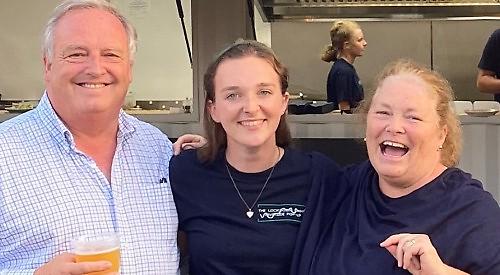 A POP-UP café, bar and restaurant on a bank of the River Thames near Henley has enjoyed a successful opening week.

The Lockdown Lodge, which is on the Copas Partnership’s land off the Thames Path, near Hambleden lock, attracted hundreds of customers when it was launched on Saturday.

It is made from four converted shipping containers with a bar and street food takeaway at ground level and a fine-dining restaurant on the terrace upstairs.

It is open from 8am to 11pm daily until August 31 but has already sold out all lunch and dinner sittings.

Founder Minna Hughes, 19, said the first few days had gone well despite a few setbacks, including a brief period on Saturday when the tills stopped working.

Miss Hughes, from Hambleden, said: “We are surprised by how incredibly busy it has been and we’ve had amazing feedback. Some things didn’t quite go to plan but people were very kind and supportive while we worked to iron them out.

“They’ve been very complimentary and a lot of customers said they’d come because they’d read about it in the Henley Standard. We couldn’t have asked for better weather in the first few days, so fingers crossed that we aren’t hit too badly by the thunderstorms that are meant to be coming.

“I’m also very thankful to my team, who have done an incredible job and I couldn’t have got this far without them.”

Miss Hughes came up with the idea after having to scrap her gap year travel plans because of the coronavirus outbreak.

She has previously run a mobile catering business and launched this one with help from her father Chris, who runs a firm providing kitchens for large-scale events.

The cabins were refurbished at his yard in Binfield Heath then brought over on large lorries and lifted into place with a crane.

The catering is provided by chef Jimmy Garcia, from London.

Miss Hughes, who is about to study primary education at Oxford Brookes University, said: “I’m definitely keeping my career options open but this has been good fun, although it’s incredibly hard work as I expected.

“We’ll have to see how the rest of it goes — and how tired I am at the end of the run.”