Woman wants speed limit cut after car is written off 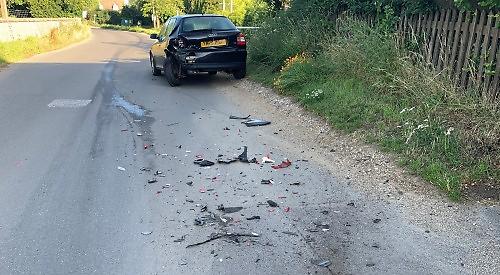 A WOMAN has called for the speed limit on the main road through Cuxham to be cut after her car was written off.

Anna Grundberg’s Audi A3 was parked outside her home on the B480 when another driver collided with the rear of the vehicle at 11pm on a Saturday.

The impact of the collision pushed her car 15m along the road.

Ms Grundberg didn’t know what had happened until the day after the incident on July 11 when she was alerted by a neighbour.

The driver of the other vehicle returned to give her his details and the matter is now in the hands of their insurance companies.

There is no evidence that the car was speeding but Mrs Grundberg said the 30mph limit should be reduced to 20mph.

She woud also like traffic-calming measures, such as speed humps, white gates at the entrances and chicanes, to help slow the speed of traffic.

Ms Grundberg, who has lived in the village for almost five years, is concerned about the volume of traffic using the road, often travelling above the speed limit.

She says that because of new housing developments in the area there has also been an increase in the number of construction vehicles and heavy good vehicles passing her house.

She has written to Henley MP John Howell and Ian Hudspeth, leader of Oxfordshire County Council, the highways authority. Ms Grundberg said: “At the very least, we can hopefully have the speed limit reduced or some sort of traffic-calming measures introduced so this doesn’t happen again.

“We speak about this at every parish meeting. I know everyone in the village is concerned about speed.”

She said the B480 was also a narrow, medieval road, adding: “We have had a big increase in HGVs because of these developments and the roads can’t cope.

“This one can’t be widened because there is a chalk stream on one side and houses on the other.

“My house has cracks on the inside. It’s only supposition, but some houses on this road don’t have foundations or cushioning to protect them from the vibrations of HGVs.

“The other thing is noise pollution, which has been steadily getting worse because of the developments.”

Ms Grundberg said she feared the problem would get worse if plans for 3,000 homes at Chalgrove airfield were approved.

Homes England, a government agency which owns the site, has put forward plans for a bypass for Cuxham to alleviate traffic but Ms Grundberg claimed this was not binding.

“That’s 3,000 houses with one car per household, on average,” she said. “If the only route for them to get to the M40 is the B480, it can’t work. We’ll have enormous traffic jams and you can’t begin to imagine the pollution and the noise, let alone the vibration. They will also destroy the Saxon field boundaries which they should be giving so much more attention to.

“One of the things I don’t understand about the proposed Chalgrove development is why they don’t create a route that goes straight to the motorway as part of it.

“It would mean cars from a 3,000-home development are channelled via the shortest route. I don’t think this bypass is the best solution.

“But irrespective of what happens at Chalgrove, we need the limit to be reduced and people encouraged to respect that.”

Ian Goldsmith, chairman of Cuxham with Easington Parish Meeting, said the county council carried out a survey of traffic speeds in the area.

This found that 59 per cent of drivers going through the village over more than a week were going above 31mph.

“Fifty per cent of vehicles passing through were speeding basically,” said Mr Goldsmith. “A quarter of them were above 36mph.

“I regularly get reports and photos of speeding cars and HGVs that shouldn’t be here because there’s a 7.5-tonne weight restriction. We have ended up having to raise funds for a velocity-activated speed sign.”

Villagers are still waiting for county council contractors to fit the device, which is being shared with Watlington and Swyncombe. Cuxham will have it for four months of the year.

Mr Goldsmith welcomed the idea of a 20mph speed limit and said he had spoken to Steve Harrod, Cuxham’s representative on the county council, and officers.

The road is also to be resurfaced next month. He said Chalgrove was not the right place to build 3,000 homes but if the development went ahead Cuxham would be “heavily impacted” without mitigation.

Meanwhile, traffic associated with the Archstone and Bloor Homes development of 183 homes at the former pig farm between the B4009 Britwell Road and the B480 Cuxham Road, Watlington, will be routed through the village after being diverted from junction seven of the M40.

The county council said it supported the introduction of 20mph speed limits in villages.

A spokesman said: “The majority of the B480 through Cuxham, from the Watlington end to Brightwell Cottage, is to be resurfaced at the beginning of September.

“We have worked in consultation with the parish council and this has provided the opportunity to make changes to the road markings through the village.

“It is hoped that this change in the lining and environment when you enter and travel through the more built-up part of the village will have a speed-reducing effect. The dragon’s teeth at the east end of the village and the various ‘Slow’ markings and 30mph carriageway roundels will also be refreshed.”

He said the mobile speed indication devices should be operational “within the next couple of months”.