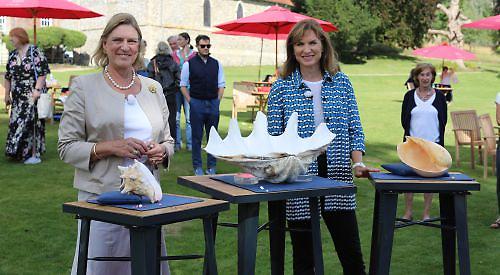 SCORES of visitors descended on Stonor Park when two episodes of the Antiques Roadshow were filmed there this week.

The BBC 1 programme was shot at the estate on Tuesday and Wednesday, when a team of six valuers were assessing heirlooms brought in by owners from the Henley area and further afield.

A production crew arrived the day beforehand and set up a table on the lawn in front of the main house. This allowed valuations to take place in the open air in accordance with social distancing regulations.

Participants queued standing a metre apart and presenter Fiona Bruce, who was filmed driving up the estate’s driveway in a sports car, chatted with them for several hours.

Most people had come after seeing an appeal on the BBC website but the estate also publicised the event.

Its volunteers, who usually give tours of the property, acted as marshals while dressed in Antiques Roadshow T-shirts.

A viewing area was set up a safe distance from the action so a limited number of invited guests could watch the filming.

Everyone had their temperature taken to ensure they weren’t carrying coronavirus and the capacity was lower than it would have been before the outbreak.

Stonor Park regularly hosts antique and vintage sales but this is the first time that it has appeared on the programme.

The Hon William Stonor, who is heir to the estate, and his wife Lady Ailsa Stonor were approached by the BBC last year and asked if they would allow an episode to be filmed in early summer. They agreed but the original date was postponed because of the national lockdown. This week’s shoot was the first Antiques Roadshow episode to be filmed since the restrictions were eased.

Mrs Stonor said: “It went really well and we were so excited to welcome the crew as we’ve always wanted them to come.

“I think they were also excited to be filming again after the lockdown and, for our visitors, there’s a sense of a return to normality after quite a stressful and difficult period. Although social distancing was in place, it’s lovely for people to get out again.

“We’re really proud to be able to showcase Stonor and it was fascinating to meet the show’s experts and watch them in action.

“They were so knowledgeable and could quickly identify the period when items were made to within a couple of years.

“They were considering quite a few venues so we’re very pleased that we were chosen. We were also incredibly lucky with the weather as, although it has been rainy in recent weeks, it was largely sunny on Tuesday with only the occasional shower.

“We were very pleased to meet Fiona, who was also extremely knowledgeable on the subject and spent a lot of time talking with everybody about what they’d bought. She said she’d really enjoyed visiting.

“We were working flat-out in the days beforehand to make sure the gardens and grounds looked their best but it was worth it.

“We’ve had loads of comments from visitors saying they really enjoyed it and it will hopefully raise awareness of Stonor Park.”

A BBC spokeswoman said the show, now in its 43rd series, is likely to be broadcast next spring.

Series editor Robert Murphy said: “Stonor Park was selected as a location because of its incredible history. Not only is it a stunning house set in beautiful parkland, but the family history makes it a really special place.

“We’ve had a wonderful time filming some stunning items in the blazing sunshine and pouring rain.

“Our experts have seen some really intriguing and valuable objects and I can’t wait to see the finished programmes.”

Earlier this year, the main house was covered in scaffolding so that an old flat roof could be replaced but the work finished in time for this week’s shoot.