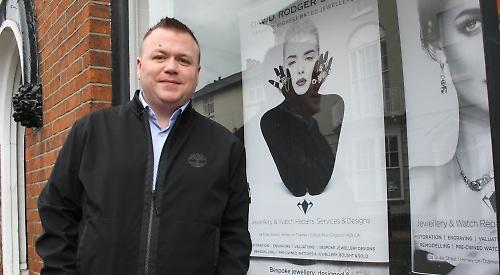 A JEWELLER is to open a second shop in Henley less than two years after launching his first.

David Rodger-Sharp, who has run the business of the same name in Duke Street since November 2018, has taken over the former DJ King premises in Bell Street and hopes it will be up and running within about a month.

The unit, which has been vacant for almost a year, will house a workshop where customers will be able to see items being made or modified and take part in workshops.

Mr Rodger-Sharp, 36, also hopes to launch a training scheme for young people in the area who are struggling with education or come from difficult backgrounds.

He says this is important to him as he grew up in care while his mother was struggling with heroin addiction and he owes his success to others giving him opportunities and instilling him with confidence.

He and his business partner, Andy Byerley, from Oxford, had been considering the idea since before the coronavirus lockdown but only took on the new lease last month.

Mr Rodger-Sharp said: “We’d set the ball rolling but then coronavirus happened and we became quite nervous as we didn’t know what the future was going to hold.

“We’re very lucky to have almost outgrown our existing space and wanted to be able to show our clients what we’re doing instead of only talking about it.

“We do a lot of repairs, manufacturing and bespoke work but we have limited room here and we wanted to create more of an ‘event’ and a sense of theatre around what we do.

“We see a lot of couples who want to be involved in making their own wedding rings so we thought it would be great to have a space where, for example, they
could melt existing items down to create something new and personal.”

Mr Rodger-Sharp, who employs seven people, said he wanted to thank the community for its support by giving something back. His 12-week course is set to launch later this year once he has arranged the appropriate insurance.

He said: “Henley is an affluent area but there are definitely young people at a disadvantage and I want to provide something to get them off the streets and distract them from worse alternatives.

“Throughout the lockdown there were a lot of kids hanging around and people saying it was giving the town a bad name, so we really felt strongly that we should go ahead with this.

“I remember being a disadvantaged teenager who most people who had written off and it’s thanks to the adults around me that I could envision a different path for myself and achieve things.

“When I did my training, I was able to make something for my mum to celebrate her being 10 years’ clean. I was so proud of her and I’ll never forget how giving it to her made me feel. I understand the benefits that support can bring and it’s heartwarming to pass those skills on and see someone flourishing. I feel very lucky that I’m in a position I couldn’t have dreamed of 20 years ago.

“I’ll be delighted if I can even change one person’s life by teaching them a new skill and giving them a passion they never realised they had.”

Mr Rodger-Sharp has placed signs in the window of his new shop, which he will be fitting out, and says he is confident it will be a success.

He said: “It could bring more business to the area as people making their own rings will stay in hotels and eat at restaurants in the area. Our expansion should also boost confidence in the local economy.

“It’s always a bit scary launching after a global crisis like coronavirus but there has never been a better time as we were able to negotiate good terms on the lease and there’s renewed interest in shopping locally.

“I’m very excited — I actually well up a bit to think about it. Sometimes I have to pinch myself when I realise I’ve got my own shop and another on the way. If you’d told my 18-year-old self, he’d have just laughed.”

DJ King, which opened in 1982, shut in October last year after owner Samuel Buckett declined to renew his lease, saying his annual rent of almost £10,000 a year was set to increase by 50 per cent.