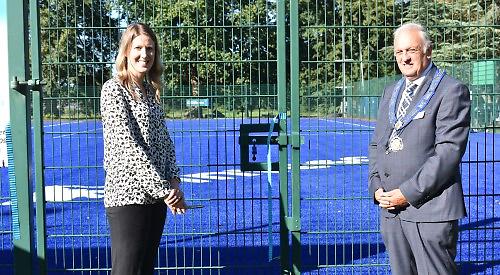 The 4G pitch has replaced the old tiger turf pitch at Dry Leas, which had been there for 18 years but no longer met modern standards. It is the first blue training facility in the UK as part of the 10-year deal with Henley-based Invesco.

It cost £127,000, which came from a combination of grants, sponsorship and donations.

South Oxfordshire District Council gave £37,500 and there were individual donations totalling another £30,000 while the club itself raised £10,000. The other £50,000 was provided by Invesco.

The pitch will be used by both the junior and adult teams as well as for five-a-side football and hockey and the Nettlebed Stingers netball team will use it as their home ground. The ribbon-cutting ceremony was conducted by club chairman Chris Nixon and Hanna Thomas, Invesco sponsorship manager, and was attended by club representatives, sponsors and Henley Mayor Ken Arlett.

Mr Nixon said: “I think it looks absolutely amazing. We’ve had unbelievable feedback from the players who have used it so far and we are keen to get the juniors playing again. It’s very important to get them playing to help with their wellbeing.

“There is a big commitment here to all sports and to the community. Lets hope we can play rugby again very soon.” The Hawks had their 2019/20 season brought to an early conclusion due to the coronavirus pandemic.

At the time they were fourth in National League Division 2 South with five matches remaining. They hope to resume playing in October.