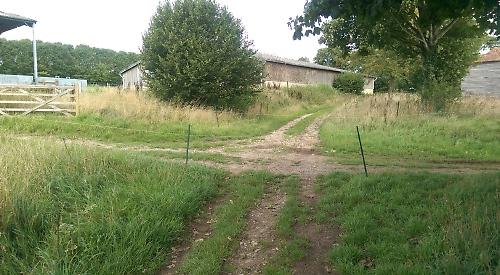 THE owner of a farm near Nuffield has denied obstructing a bridleway.

Cyclist Graham Gibson said he came off his bike after colliding with what he described as “wire” across English Lane.

Robert Laycock, owner of English Farm, which is adjacent, said string was used a temporary measure to move 80 cattle over a period of 10 minutes and denied it was dangerous.

Mr Gibson, 53, and his partner Claire were doing a circuit, starting and finishing in Wallingford, on Saturday morning when the incident happened.

He said he didn’t spot the temporary barrier until it was too late and there were no advance warning signs. However, he wasn’t injured.

Mr Gibson, from Didcot, said: “We probably go cycling two or three times a week. It had not been a great week weather-wise so we thought we’d get an extra one in on Saturday morning.

“I was cycling along the bridleway from Timbers Lane and, just after the tarmac road gives way to a flinty track, suddenly I hit these wires placed across the bridleway.

“With the wire being white and these green stakes, you couldn’t even see it.” He said he had been travelling at about 18mph to 20mph when he rode into the barrier.

“The front wheel of the bike pushed the wire down and it then sprang back up and got caught up around the crank arms and chain, bringing the bike to a very abrupt halt,” said Mr Gibson.

“I came off the bike and somehow I ended up standing on the ground and just thought, ‘What the hell was that?’

“I went over the front of the bike. I don’t honestly know what happened. The bike was lying on the floor and I was standing 20 or 30 yards down the road from it. I was probably more shocked than anything. It all happened so fast.”

Mr Gibson said he wanted to warn other cyclists, walkers and horse riders.

“It is a busy route for cyclists — we’ve been along there many times,” he said. “I can’t imagine anyone in their sane mind would want to bring someone off.

“It seems like it was done for a reason. Whether they were moving animals through, or they’d moved them through, I couldn’t see any in the field. If it had been a gate you could have seen it and taken avoiding action but a couple of strands of wire at that level you can’t really see.

“It was probably no more than 2ft off the ground.”

Mr Laycock said: “It’s clearly a temporary fence. It’s not electrified, it’s just a piece of string, which he obviously put back up.”

He said the barrier was up for no more than 10 minutes, adding: “We never obstruct that bridleway. Cyclists often come very fast but all people are welcome and normally cyclists are sensible. We have no permanent fencing up on any footpaths.

“I’d be upset if anybody was hurt but I don’t think that string was capable of hurting anybody.”

“A cyclist coming through very fast could cause a stampede,” he said.

“People who visit the countryside have a duty to co-operate with farmers. People should always follow the Countryside Code, which says very clearly to co-operate and respect people working with livestock.

“We try as hard as we can to be on call 24/7. We welcome feedback from people who actually engage with us rather than shouting through the press. The farm manager was no more than five minutes away.

“When I bought the farm 20 years ago it was inaccessible because the bridleway was overgrown. We’re not about keeping people out, we’re very proud of what we do.”