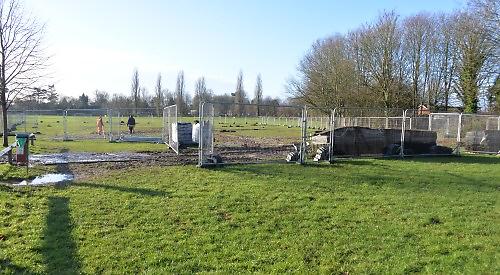 A NEW sports pitch at Mapledurham playing fields in Caversham will open to the public next week.

Reading Borough Council, which is a trustee of the green space off Upper Woodcote Road, reseeded it some months ago and the grass is now established after undergoing several cuts.

The council will remove the protective fencing it installed around the perimeter but has warned this could go back if too many people use the field, which is still vulnerable to damage from ball games or dogs digging.

It will install goalposts at the western side, next to the new playground, and says sports should be confined to this area.

The council has also started installing a central footpath through the site with benches, lighting and an avenue of new trees which should be in place by November.

Meanwhile, the refurbishment of the sports pavilion is continuing with new roofs and external cladding being installed. This will be followed by an internal fit-out which should be finished by October.

The site will be the new permanent home of the Heights Primary School, a free school which has been based at temporary premises off Gosbrook Road since it opened in 2014.

Work began with the clearing of land at the northern end of the fields in March last year and building work by Kier Construction continues. The school is to remain at its current home for another year as the new building is no longer set to finish this month because of delays caused by the coronavirus outbreak.