Club to Pub swim with a difference 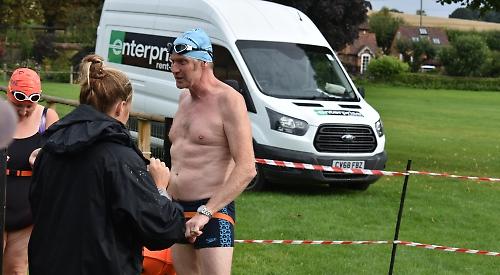 MORE than 500 swimmers took part in the rescheduled Club to Pub swim.

The event is usually held in July and participants swim downstream from Henley Rowing Club to the Angel on the Bridge but this was not possible this year because of the coronavirus pandemic.

Instead, they set off from Temple Island Meadows and headed downstream for 1.6km towards Hambleden Lock on Friday.

The participants queued up on the bank prior to starting, while adhering to social distancing guidelines, and set off in waves.

They were told to sanitise their hands and only allowed to enter the water two at a time via
ladders.

A total of 502 swimmers took part in the afternoon and evening during intermittent showers.

The fastest man home was Paul Hare in a time of 19 minutes 32 seconds, while the fastest woman was Lucy Iball, a rower from Putney, in 21 minutes and 15 seconds.

Actor Jason Flemyng, who starred in Lock, Stock and Two Smoking Barrels, Snatch and The Curious Case of Benjamin Button was among the participants.

Peta Bowyer, of Brook Street, Benson, was taking part in the event for the first time because she wanted to make her 70th birthday a memorable one.

She and her daughter, Kate Sherwood, from Kent, finished in exactly the same time of 35 minutes and 11 seconds.

Mrs Bowyer, a retired technical author and the rear commodore at Henley Sailing Club, said: “I wanted to do the event because it was my birthday and I couldn’t do anything else, so I thought it would make it a bit more memorable.

“I only decided to do it last week. I have done a little swimming in the past but nothing recently.

“The conditions weren’t too bad, even though it was raining. The rain was actually quite nice.

“When I got to Temple Island, I thought it was the finish line and then it just went on and on and I thought, ‘Oh, how much longer is it going to be?’ but it wasn't bad at all.”

Matilda Brock, 22, from Sonning Common, was also taking part for the first time. She was representing Henley Open Water Swimming Club and finished in 28 minutes and 25 seconds.

She said: “The river was flowing quite fast, so it was actually a lot of fun. I was very happy with my time but I didn’t really plan for a particular time and was just happy to finish.”

Miss Brock, a former pupil at Queen Anne’s School in Caversham, was the 14th fastest swimmer in the non-wetsuit category, which had a total of 121 entrants.

She said: “I have swum quite a lot over the summer and I have enjoyed it since I was young.

“I got into open-water swimming about five years ago but I’ve not done it in the last two years. Because of lockdown it was quite a nice thing to be able to do.

“I only found out about the event a couple of months ago and then I was on a waiting list and I found out I was in three weeks ago. It was nice to have something to look forward to because it marks the end of the open-water season so it is good to celebrate the end of all the training.”

She was cheered on by her parents, Lynn and Russell, boyfriend Dan and the family dog, Polly. Will Spriggs, of Fair Mile, Henley, achieved a time of 28 minutes and 11 seconds.

The 41-year-old was taking part in his fourth event and waited at the finish line for his friend Adam Cotton.

Mr Spriggs said: “This is definitely the weirdest version of the Club to Pub I’ve done. It was more segregated than normal but it worked very well. It was more spaced out so there was a lot less banging into people.

“After the year we’ve had, any sporting event or anything competitive is good news for me.

“I just swim locally in the river with some friends twice a week but Club to Pub is the only event I do.”

Mr Cotton, 42, of Gallowstree Road, Peppard, finished in 30 minutes and 15 seconds and was greeted by his daughter Sienna, seven, at the finish.

He added: “I quite enjoyed it. It was quite nice because the spectators were able to walk along the bank and follow. You can’t normally do that, so that made it quite special.

“It was a bit different to normal. When you do the other route, you can see the finish from quite a long way out but with this one you just kept going round and round the bend.”

Rower Ella Hollaway, from Henley, was taking part with Miss Iball, a friend, and finished in 27 minutes and 17 seconds.

She said: “We usually do Henley Women’s Regatta and Lucy does Henley Royal Regatta.

“We got into swimming because of lockdown because it’s something we can do outdoors.”

El Etherington, from Caversham, took part with her friend Julia Vivian, from London, and finished in 31 minutes and 51 seconds.

She said: “When it was originally meant to be in July, it was meant to be my 40th birthday celebration but it was cancelled so I thought I would do it anyway. My 41st is going to be epic.”

James Waite, from Henley, recorded a time of 24 minutes and 51 seconds.

He said: “I’ve done it before — it’s good to support a local business and events when they are trying to put stuff back on.

“I missed out on getting my entry in originally but luckily got a slot as someone pulled out.

“It’s nice to swim a different stretch of the river. It’s not quite Club to Pub but you appreciate the difficulties and it’s just nice to see it’s on.” Jude Coleman, Sarah Barron and Bekki Wedd, all from Henley, took part together.

Mrs Coleman said: “We have all been doing quite a lot of swimming through lockdown and lots more open water. It’s really nice to have the event back on in a different format and to support it.”

Mrs Goodman is now entering her third year of undertaking an open water swim every day.

She started the challenge to overcome a fear of water in August 2018 initially for a year but has carried on.

She said: “I had a think about whether stopping would add anything to my life and the answer was ‘no’ and continuing made more sense.

“It’s really good for your mental health as it clears your mind and you always feel great afterwards.

“I have agreed to do a Channel crossing next year so I don’t see myself stopping anytime soon.”

Mrs Goodman said she enjoyed the event adding: “It was nice doing it with friends.”