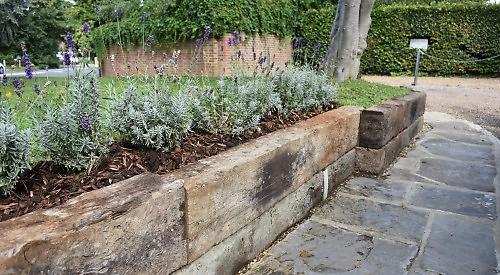 THE “green triangle” in Bell Street, Henley, has been refurbished at a cost of £10,000.

Henley Town Council has erected a new supporting wall made from recycled wooden sleepers along the eastern boundary and planted a row of lavender.

It has also extended the grassed area further south.

The council’s parks services team also filled in dips in the land with top soil and grass seed and ground down the stump of an old cypress tree. The area will be maintained by members of the Northfield End Residents’ Association.

The council has also replaced the adjoining pavement with York stone to bring it into line with pavements in the town centre.

Residents had long been campaigning for this as the pavement used to comprise York stone until the Nineties when it was replaced with tarmac.

However, the work couldn’t go ahead for many years because of a long-running legal battle over whether that part of the street was public land. This was resolved some years ago but the overhaul had to wait until Oxfordshire County Council, the highways authority, had rearranged a number of parking spaces.

Helen Barnett, Henley town and community manager, said: “It has been a real team effort and we’re absolutely delighted with the way the area has been restored.

“The residents have campaigned long and hard for this and it really improves an important gateway to the town.”

Pauline Vahey, from the association, said: “It looks beautiful and is vastly better than what was there before. It gives visitors a lovely impression of the town, which is important for the local economy as well as improving things for residents.”

Last year, the council and residents’ association overhauled the green space opposite in Northfield End.