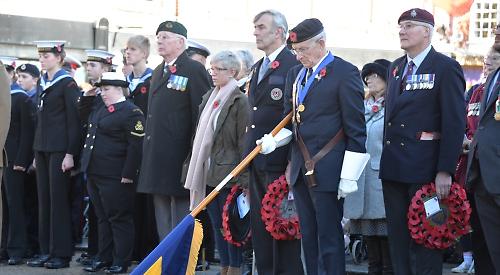 HENLEY’S Remembrance service could be live streamed online this year to allow it to go ahead safely.

Members of the town council’s events sub-committee said it was important for the event to go ahead despite the coronavirus pandemic.

Traditionally, councillors and their partners attend the service and ceremony outside the town hall and there is a parade.

There are also representatives from local branches of the Royal British Legion, a bugler to play the Last Post and a member of the clergy as well as a crowd of people in Market Place.

This year, the council is considering holding the event on Sunday, November 8, but limiting the number of people and providing a live feed for those unable to be there. Under government guidelines a maximum of 30 people are allowed to attend outdoor gatherings.

Deputy Mayor David Eggleton suggested just having himself and Mayor Ken Arlett to represent the council.

He said: “I understand that we have to fit within government guidelines but I think it is very important that we have this event.

“We will need to emphasise that people need to keep their distance.”

Councillor Kellie Hinton said it was difficult to see how the event could go ahead as normal.

“We are local government and therefore we can’t go against the government guidelines,” she said. “Unless they change, we can’t have more than 30 people.

“We would normally have 16 councillors but I know some wouldn’t be able to make it. I don’t see how you could do the parade and the laying of the wreaths.

“Unless there were more slots over the weekend, I think we are going to have to drop the parade and possibly the wreaths because we can’t go against government advice. It is a civic event so I don’t think you can limit it. No councillor is more important than another and we can’t have only Henley Residents Group and no Conservative or independent councillors.”

Councillor Arlett said: “I know we are only meant to have 30 people but I’m sure with the size of Market Place that we can put people in different areas. I don’t think we will have it as it normally is but we need to have something to allow the organisations to come along.” Helen Barnett, town and community manager, said it would be sensible not to have any small children at the event or it would become unmanageable.

“We have to think long and hard about how many people we can have with social distancing,” she said. “Perhaps we could have separate times for people to come and lay their wreaths. I think the most important thing is that we have something at 11am.”

Cllr Hinton said she would be happy to organise a digital wreath- laying service to help reduce the number of people at the event.

The meeting heard that the council had already discussed streaming options with the organisers of the Henley Literary Festival, which is currently taking place online only.