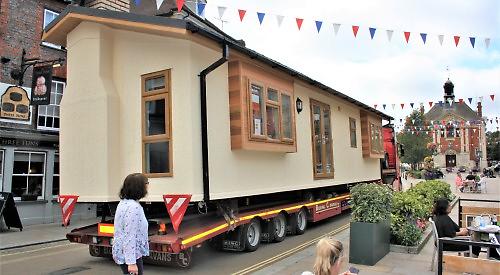 It was the second time in less than a month that the town centre has been brought to a standstill by heavy goods vehicles.

The low-loaders from Boxhill Caravans, of Surrey, — each carrying a single-storey unit on its trailer — got into difficulty shortly after entering the town from the bottom of Hart Street at about 1.30pm on Wednesday.

The drivers couldn’t turn right into Bell Street at the crossroads as it was closed for roadworks so instead tried to negotiate the right-hand turn around the back of the town hall from Market Place onto King’s Road.

The first lorry got stuck on the corner for some time, mounting the traffic island at the foot of Gravel Hill several times as the driver tried to get around and reversing to avoid striking the scaffolding around the Queen Victoria pub.

Neither lorry could reverse so heavy congestion built up in Market Place all the way along Hart Street to Henley Bridge and along King’s Road, Gravel Hill and Duke Street.

Passers-by stopped to take videos and photographs on their phones and drivers were sounding their horns and trying to turn around to take alternative routes.  The unit of the rear lorry cut t one of the strings of red, white and blue bunting that runs across Market Place.

It took about 15 minutes for the vehicles to finally clear the corner and make their way along King’s Road towards the roundabouts in Northfield End and the congestion eased.

The incident comes as residents and Henley Town Council are calling for a 7.5-tonne weight limit on lorries passing through Henley.

Last month a Camfaud crane lorry broke down on the corner of Bell Street and New Street on a Friday morning and stayed there for more than three hours.

Amanda Chumas, who lives in Bell Street and is leading the campaign for the weight limit, said the incident strengthened her case.