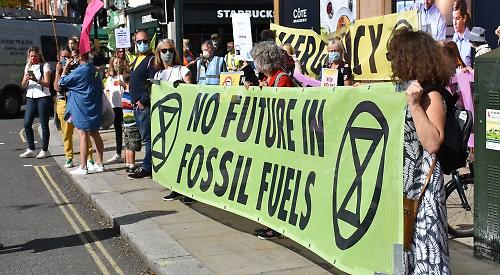 A BAND of drummers led a march through Henley to raise awareness of the dangers of climate change.

About 40 protesters carrying flags, placards and banners marched from outside the Catherine Wheel pub in Hart Street to the bandstand at Mill Meadows, where they listened to a series of talks by experts.

The “non-disruptive” event on Saturday was organised by the Henley branch of the Extinction Rebellion movement. It followed a protest calling for a “green” coronavirus recovery which took place in the town centre in July.

This time the group was promoting the Climate and Ecological Emergency Bill, a private members’ bill which calls for action to protect the environment to be enshrined in law.

Supporters claim that the Government is ignoring official warnings that the UK’s target of zero net carbon emissions by 2050 may not be enough to slow rising world temperatures.

The protesters also highlighted the problem of air pollution in Henley and promoted the campaign to ban heavy goods vehicles from taking shortcuts through the town, which is a major contributor to the problem. The march was meant to start outside the town hall in Market Place but was moved after organisers realised this would have disrupted a wedding.

As they gathered on Hart Street from 11am, they unfurled three banners which read “No future in fossil fuels”, “Climate emergency” and “We want to live”.

Other protesters were waving brightly-coloured flags bearing the Extinction Rebellion logo or home-made placards with slogans including “Air pollution kills, clean air = healthy lungs” and “We must act now on climate change before it’s irreversible”.

Several passing drivers sounded their car horns and cheered as they went past and most passers-by made supportive comments, although one said: “Don’t they know there’s a pandemic?”.

All the adults taking part in the demonstration wore face masks and were asked to observe social distancing.

At 11.30am the group marched towards St Mary’s Church led by the drummers, who played a lively rhythm while blowing whistles.

They stopped to cross at the junction of Thames Side with Henley Bridge in single file, then picked up the march from Singers Park in Riverside to the bandstand. They handed out leaflets and talked about their cause to onlookers, who were stopping to take pictures.

Once the march reached Mill Meadows, the participants listened to talks from David Dickie, of the Clean Air for Henley campaign, and three representatives of the Scientists for XR and Doctors for XR groups.

Members of the public stopped to listen and chat with the protesters afterwards.

Patrick Hart, a GP, talked about the health impact of air pollution.

Dr Knapp said: “Like many of you, I have spent lockdown with a growing concern that disproportionate action to address the climate emergency will result in a hostile world.

“We are treating the world as an infinite resource to be plundered and this is unsustainable.”

XR Henley co-ordinator Kate Oldridge, from Shiplake, urged onlookers to encourage others to join the cause. She said the economy shouldn’t be based on “endless growth” and big companies should treat society and the planet as “stakeholders”.

She said: “This is everyone’s problem. We don’t have a choice and the best chance we have of tackling it is to get the Government to declare a climate emergency.

“Look at the changes we have made so quickly following the covid outbreak — suddenly the Government is injecting vast sums into the economy not seen since the Marshall Plan [after the Second World War]. Look at how so many companies have adapted to working from home.

“Individuals and corporates are doing loads to reduce their carbon footprint but Extinction Rebellion is the best chance we have of changing the system.

“Everyone has a responsibility to speak to their family and friends. I know it’s hard and I think it’s probably straining some of my own friendships, but we all need to start taking responsibility for making change.”

The event closed with a procession up and down Remenham Hill, which is often congested with traffic during the rush hour.

Afterwards, Mrs Oldridge said: “It went really well and I was pleased that people were stopping and taking notice. It was a good chance to show that ‘normal’ people in Henley support this.”