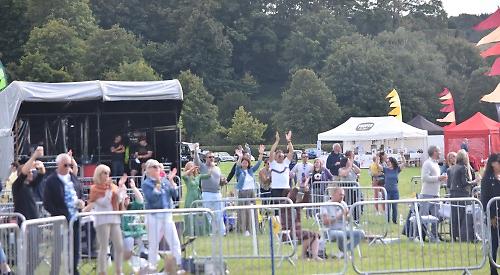 ORGANISERS of a three-day pop concert have denied claims that they were told by council officials to turn the noise down.

The Pub in the Park drive-in “garden party” was held on Temple Island Meadows over the weekend before last and attended by 8,000 people.

About 10 residents of Remenham complained about excessive noise to the parish council. Council chairman John Halsall is also leader of Wokingham Borough Council, which licensed the event.

But this week organiser Brand Events denied this.

A spokeman said: “Our noise management team was continually reviewing noise levels to ensure that we were compliant with all relevant licensing controls, as per our agreed noise management plan.

“At no point were we asked to turn the music down by environmental health officers as they were happy that our noise levels were compliant. We did receive one residential noise complaint via the borough council, which was dealt with accordingly.

“We also received three further residential complaints via social media, which were all responded to directly. These could potentially be attributed to the re-orientation of the stage compared with previous events held at Temple Island Meadows.”

He added that letters had been sent to local residents to warn them about the extra traffic and a traffic plan was in place.

Tanya Copas, from the venue, said: “We are very selective in terms of the operators we work with at our venue to ensure that events are suitable in nature to the area and professionally managed by experienced personnel.

“A key element of this is minimising the impact on our neighbours wherever possible, an aspect we take very seriously.” She said Cllr Halsall’s comments were “misleading”. Ms Copas said: “The council officers were not called to site as a result of any problems, as implied by Cllr Halsall, but present in their professional capacity, as I would expect.

“Music was not turned down as a result of an issue but closely managed and adjusted throughout to ensure compliance.

“Traffic management was thoroughly planned and well -managed.  I am aware that there was a 15-minute period when traffic was very heavy outside Cllr Halsall’s house at the very peak period between performances on Saturday but quickly cleared.

“We are are hugely disappointed that, in his capacity as leader of Wokingham Borough Council, Cllr Halsall did not acknowledge or in any way commend the wider benefit brought by this event to the event industry or the attendees from his own borough and the wider community.”

Cllr Halsall said: “Normally, events will measure the noise themselves and are then obliged to give the results to the council but I don’t know if that happened as it was a new event and it may not happen again. It’s difficult as noise is one of these things that happens then it goes away.”

The borough council said it felt that it was appropriate for two environmental health officers to attend the event due to its size.

A spokesman said: “This gives reassurance to residents, attendees and the organiser that action can be taken depending on what takes place.

“The officers were present at various points of the weekend and able to act on noise, covid health and safety and food safety and licensing matters. On the Saturday night, they noted a bass content and spoke with the noise consultant for the event who had already identified this issue and contacted the sound desk who responded in a collaborative manner.”

Andrea Peart, of Remenham Hill, said: “We are used to so many wonderful events throughout the summer with little or no sound disruption.

“However, Pub in the Park was on a different noise level — the noise levels were unacceptable for a good part of the event, including the morning rehearsals.”