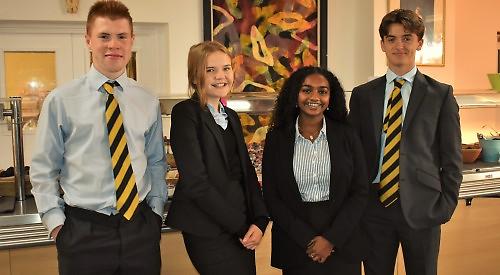 THE Oratory School is now teaching girls for the first time in its 161-year history.

The independent Catholic school in Woodcote officially became co-educational at the start of the new term on Monday last week with 47 “pioneer” girls joining the 250 boys.

The girls are all members of the new Wootten House, which is named after the school’s first pastoral matron, Frances Wootten. Seventeen are boarders and the rest are day pupils.

Most are in years 7, 9 and the lower sixth-form as these are the most popular points of entry, with a smaller number starting in years 8 or 10. All girls’ spaces for this year were taken and the school had a waiting list.

The Oratory says it wants to become fully co-educational and there has already been strong interest from girls’ families in the next academic year.

The first female prefects and a head of house will be appointed next year, when the current intake progresses to the upper sixth.

Most girls applied months before the coronavirus outbreak but some signed up after taking virtual tours and meeting staff remotely.

The school is now holding normal lessons again but with pupils grouped in “bubbles” and socially distancing. A small number are still learning remotely due to personal circumstances.

The girls were officially welcomed by headmaster Joe Smith and began their first week with a series of fun non-uniform activities to help them get to know each other.

Dr Victoria Fogg, house parent in Wootten House, said: “It feels like we’ve been doing it for years and there’s a real buzz around the place with lots of fresh new faces.

“It has been really busy and the girls have already been auditioning for plays and joining in with lots of sports training.

“The boys have been helping to welcome them so I think it’s going to be an exciting year.” The newcomers include Elsie Roff, 16, from Stoke Row, who first visited the school to appear in a production of A Midsummer Night’s Dream while studying at Langtree School, which is also in Woodcote.

This was before the Oratory announced it was going co-educational in January 2019 when it often needed girls to balance the cast of shows.

Elsie said: “I loved it, so when I found out they were taking girls I wanted to have a look around. I went to a taster day in November and enjoyed it so I decided this was where I wanted to be.

“It has been amazing so far. Everyone is so nice and we’ve all bonded quickly. It’s important to be able to make friends with boys as well as girls and so far we’ve integrated well rather than standing out.”

Fellow year 12 student Kala Green, from Sonning Common, who was previously at Gillotts School in Henley, said: “I wanted to go somewhere co-educational for sixth form and thought this was a beautiful school with amazing facilities. The teachers have really welcomed us.”

Ebie Roper, 11, from Lower Assendon, is attending on a sports scholarship. She plays a range of games and particularly enjoys running.

She said: “It’s great here — everyone is so friendly and it’s easy to make new friends. I know I’m never going to be bored because there’s so much stuff to do.”

Millie Roberts, 13, of King’s Road, Henley, has moved up to the main school from the Oratory Preparatory School in Goring Heath.

She said: “I was interested as soon as the news was announced last year. I had a really good time at the prep school and was pleased to be able to carry on as a lot of my friends came here.”

She was admitted on a music, sports and drama scholarship as she sings, plays violin and enjoys hockey and rowing.

Bonnie said: “I’d seen the school before so when it went co-educational I came here for an open morning. All the teachers were inviting and wanted to get to know you, so I liked it straight away.

“I’ve got a lot of old friends coming here but it’s nice to also be able to make some new ones. There are so many opportunities and I’ve been able to make friends with girls in other years.”

Mr Smith said: “It’s great to be back in school generally and it feels as though the girls have always been here.

“It’s funny because you wait so long for something to happen and within 24 hours it feels entirely right and normal and not strange at all.

“Our new girls are lovely — they're fitting in well and really throwing themselves into all aspects of school life.

“I’ve heard from one father who said their daughter came home, gave him a big hug and said, ‘Thank you for sending me to the Oratory’. It’s still early days and I’m sure there will be challenges along the way but we’re well prepared and delighted with how it has gone so far.”

The school, which was founded in 1859 and moved to Woodcote in 1942, began discussing admitting girls soon after Mr Smith was appointed in 2016.

Surveys of parents showed the school’s single-sex aspect was no longer considered important by most and many other independent schools were going in the same direction.