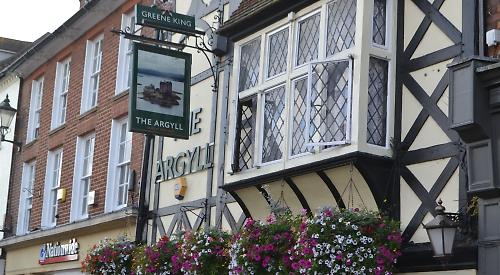 PUB landlords in Henley have criticised the Government for making them close early in a bid to halt a second wave of coronavirus.

They say Henley is being treated like a university town and should be exempt because it does not attract crowds of late-night drinkers.

New rules announced by Prime Minister Boris Johnson on Tuesday came into force yesterday (Thursday) and mean that pubs, bars and restaurants have to close at 10pm and are restricted to table service only.

He said: “It’s a blunt instrument to put everyone in the same boat. We’ve made sure that our businesses are covid safe environments.

“It would appear that younger people are bending the rules and it seems to be in university towns where the problems are but I don’t blame them. They’ve come to university and want to spend time with their friends.

“However the rules affect everyone and the lovely people of Henley shouldn’t be affected.”

Brakspear own 24 pubs in and around Henley and Mr Davies said: “We have to deal with it and we have to be positive and we will carry on.

“The businesses in Henley should be commended as they are following the rules and they are safe. It’s going to be a long hard winter but hopefully by spring, things will be better.”

Dan Wilson, who helps his wife Helen Blundell run the Bird in Hand in Sonning Common, said: “The big problem is universities opening and students from all over the country travelling from hot spots. That should be the main concern for the Government.

“They should take the view that Henley has rural pubs and we won’t make a difference but pubs in big cities will.

“I don’t think it’s fair that we are under the same regulations. I’m incredibly sceptical.”

Mr Wilson even suggested that a second lockdown may be more effective to bring the number of cases down instead of “creating random regulations”.

Nick Willson, who owns the Flowing Pub Spring Pub in Playhatch, said: “The Government is trying to put rules in place for everyone but there should be exceptions.

“We are all being tarnished with the same brush when we’ve got a lot more space than big cities and we comply with the rules anyway.

“We are suffering when there aren’t any local problems.”

Mr Willson, who runs the Henley Road pub with his wife Hazel Lucas, said the table service rules would make life difficult as the pub’s bar is upstairs.

It’s going to cost us in staffing and no one is making a lot of money at the moment anyway so it’s going to be hard to employ extra staff for this table service.

“There is also going to be a lot more contact when our first duty is the safety of our staff.

“People have said we are the most covid-safe pub in the area but now all the stuff we’ve done and our hard work has been rendered useless. We’ll sort out something that works for everyone — we will never up.”

Neil Ainsworth, landlord of the Argyll in Henley market place, was more concerned about the future of the business.

He said: “The issue is that we still have to pay full rent when we aren’t earning as much as we used to.

“We are probably going to go bankrupt. We’ve already been doing this for six months - how much longer is it going to go on for? We do not have an endless pit of money.

“These regulations are going to have a catastrophic effect on the hospitality industry and people are going to lose their livelihoods.”

Joe Ball, general manager of The Bull on Bell Street, said: “The 10pm curfew will certainly affect us on weekends.

“It will just be a case of seeing if people’s drinking times change or if we lose our late-night profits.

“We already do table service and we have got an app from when we first re-opened. We try to promote the app as much as possible.”

The Bird in Hand in Greys Road in Henley already closes at 10pm.

Graham Steward, who runs the pub with his wife Celia, said: “It makes sense. I think that some young people are trying to beat the system and it has caught up with them so hopefully this will help them realise and become more sensible.”