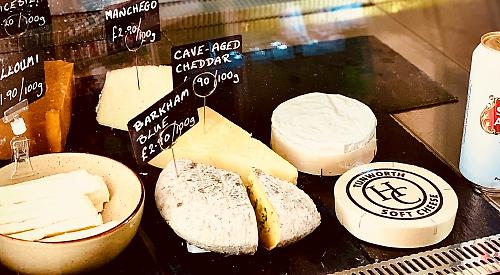 A WOMAN has opened a new convenience shop in Sonning.

The Village Hamper in High Street is run by Kathy Drogemuller, who was tired of having to travel outside Sonning for essential supplies as there was no general store there.

The business, which is located at the former Ivy of Sonning restaurant, stocks basic items, such as bread, milk, fruit and vegetables as well as homemade cakes. It has large dispensers for flour, pasta and oats and a deli counter.

A tearoom will be added at the end of next month.

Ms Drogemuller, 58, said: “I had wanted to open it all at the same time but because there have been building delays I thought I would go ahead with the shop.

“I think I have actually benefited from that because there has been a lot to learn.

“I have always felt there was a need for a shop — there is absolutey nothing else in Sonning like this and you have to drive at least a mile to go to the nearest petrol station just to buy bread and milk.

“We get lots of boating traffic come through Sonning as well and they are often looking for basic supplies.”

Ms Drogemuller, who has three grown-up children, grew up in Woodcote Road, Caversham, before moving with her family to Canada, where she set up a business importing British goods for expats who missed them.

In 2007, she moved back to this area, first living in Goring and then moving to Sonning three years later. She was an IT worker at LEGO in Slough for 10 years until she was made redundant in London in 2017.

Based outside the Coppa Club, it has just had one of its most successful years to date and will continue trading next year.

Ms Drogemuller took out a
12-year lease on the shop premises in May and then refurbished it with help from her brother, Chris Wright, a landscape gardener from Caversham, who transformed the garden.

The Village Hamper was due to open on August 29 but this was put back a week as some building work was delayed.

Instead Ms Drogemuller had a “soft” launch, selling homemade cakes, fresh bread and cold drinks from a window over the August bank holiday to give residents a taste of what to expect.

She said that starting a new business during the coronavirus pandemic was “a leap of faith” but one she was glad to have taken.

“It has gone much better than I expected,” said Ms Drogemuller. “In the early days we could only have a limited number of builders on site at one time and we did have a struggle with sourcing building materials. But my brother has been absolutely brilliant.”

She said she was looking forward to opening the tearoom, adding: “The launch will have to be low key but hopefully when we are all able to go back to normal then we can have a grand opening.”