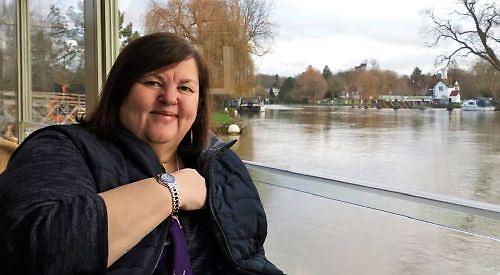 A MINUTE’S silence was held in memory of a Henley Hockey Club stalwart.

Sue Burrell was remembered before the start of the women’s second team’s game against Marlow at Jubilee Park on Saturday when the players stood around the centre circle.

Ms Burrell, who had been a member of the club for more than 25 years, died in April after a short illness. She was 54.

At the time, the club described her as a “fiercely loyal member”.

It said: “The club has not only lost a great supporter and ambassador but for many they have lost a close and dear friend. The sideline and clubhouse will be a duller place without her.

“For years, Sue both played in and captained the ladies’ thirds and fourths and she was a long-standing committee member, holding many positions including club secretary, fixtures secretary and ladies’ club captain.

“She organised numerous dinner dances and socials over the years and was involved in a number of hockey tours.

“In recognition of her contributions to the club, Sue was made a vice-president in 2016 and a non-executive director in 2018.”

When she retired from playing seven years ago, Ms Burrell not only continued with her administrative roles but also became matchday manager for the ladies’ third team, travelling great distances to help from the sideline.

Saturdays for her involved supporting Henley Hockey Club teams at Jubilee Park, regardless of the weather or who was playing. The club said: “She believed strongly in giving the younger players opportunities in the higher teams and so there are countless players who will feel a great deal of gratitude to her as she helped them on their playing journey through the club.

“Sue also contributed to the wider hockey community as she was a valued member of the Trysports League committee. No one knew the league and registration rules better than Sue and she was the fount of all knowledge for other club results and performances.

“Sue passionately followed the England and GB teams closely, often going to Bisham Abbey to watch the GB squads play matches and waking up at all hours to ensure she could tune in to watch them on BT Sport. Among many fond memories, Sue will be remembered for her ‘wicked sense of humour’, her love of the colour purple and her many handbags and shoes.

“Sue loved being part of a team and part of our hockey family. She enjoyed spending time pottering around in the garden and also going on her daily long walks. She was dedicated to whatever she did, whether that was work, hockey or friendship.

“Above all, Sue was one of the kindest and most caring people you could meet. She offered sage advice and always gave so much time to her friends and teammates. She will leave a large hole in our collective hockey heart.”

Money raised in her memory was split between the Royal Berks Charity and Yorkshire Cancer Research.