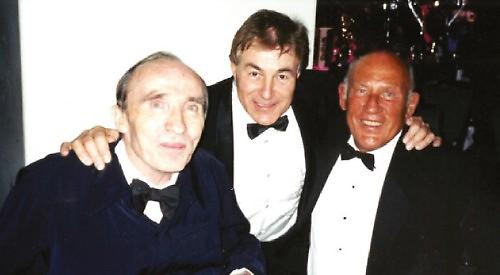 A MAN who is undergoing cancer treatment fought off a mugger who tried to steal his £24,000 Rolex watch.

David Brodie, 77, was approached by the woman as he was getting in his car in Goring high street after collecting a prescription from a chemist.

She pressed her body up against him, hugged him and, speaking in an eastern European accent, said she wanted to kiss him because he was “very handsome”.

Mr Brodie told her to leave him alone but she forcefully kissed him on the cheek and was going for his lips when he felt his watch being slid over his left hand and realised she was trying to remove it. He pulled his arm back but she wouldn’t let go so they tussled for a few seconds before he pushed her away.

The woman then ran off with another young woman who was waiting on the other side of the road.

Mr Brodie, a veteran racing driver, briefly followed but lost sight of them as they ran along Upper Red Cross Road, where he believes they got in a car and drove off.

He called the police, who later visited him at home in Whitchurch, where he lives with his wife Peggy, and took away his clothes, his face mask and the watch to swab them for DNA.

Mr Brodie, who was diagnosed with myeloma in 2012 and undergoes daily chemotherapy at home, was shocked by the incident, which happened at about 11am on September 18.

He said: “I was standing very tight to the car when this woman came up and said something like, ‘You’re very handsome and I want to kiss you on the lips’ in broken English.

“It was completely unexpected as she was nicely dressed, not overly made up and generally very smart and presentable.

“I had my back up against the car and it crossed my mind that she might have escaped from some kind of hospital or home.

“I really didn’t know what to think and didn’t want to push her off because there was a busy road right behind her.

“Then suddenly I felt the watch going. She must have known exactly what she was doing because she’d already unclasped it, which takes a lot of effort.

“Another half-second and she’d have been off with it — that would have been one hell of a payday. She actually fought me for it, which I couldn’t believe. It’s absolutely despicable.

“She probably saw me walking down the street and thought, ‘Right, I’ll have this silly old b*****’ but she didn’t reckon on being rumbled.

“I suppose it usually works as you can imagine some daft old sod being quite flattered by the attention.”

Mr Brodie, a British Touring Car Championship driver who has been racing since 1963, said he was lucky not to lose his watch, which was a present from fellow racing driver Sir Jackie Stewart in 1974.

“I wash it every few weeks as it gets dirty quite quickly but luckily I didn’t wash it when I got home. The police should be able to get some DNA as her hands were all over it.”

Thames Valley Police confirmed that they were investigating. Anyone with information should call 101, quoting reference number 43200293663.

Mr Brodie described the woman as being in her late thirties with fair hair and wearing a smart white blouse and skirt.

The so-called “hugger mugger” scam, in which women kiss or cuddle their victims before stealing their valuables, is well documented in Oxfordshire and a spate was reported in several towns last Christmas.

Two women were also reported to the police last year after approaching Henley shoppers and asking them to give money and sign a petition for a deafness charity.

They became aggressive when challenged and may have been linked to a series of distraction thefts in Reading.

An 18-year-old woman arrested in Henley on suspicion of theft on the same day is also being investigated about the Goring incident and has been released on police bail until October 16.

• Police are still investigating the theft of a replica 1968 Mk 1 Ford Escort from Mr Brodie’s house in Whitchurch high street in June. The burglars broke in via a neighbouring property and drove off in the £60,000 vehicle after raising a security shutter from the inside.