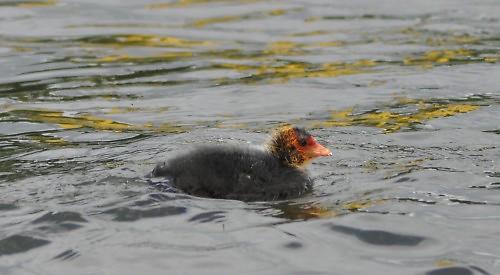 The contest encouraged budding young photographers to record the wildlife on their doorstep with a theme of “Colour in nature”.

The judges said they were impressed by the quality and variety of the entries.

They considered how well each photograph illustrated the theme, its composition and whether it showed an original perspective.

Emilia, who is a pupil at Shiplake Primary School, photographed a coot chick on the River Thames.

Violet,  who attends Gillotts School in Henley, snapped a picture of a dragonfly in her garden pond on a phone.

Michael, who is also a Gillotts pupil, photographed some purple allium sphaerocephalon coming into flower.

Violet, who was still at Trinity Primary School in Henley when she entered, said she had been photographing an insect in her garden when she spotted the dragonfly.

“I started taking pictures of it,” she said. “I was quite close because I was doing it on a phone so I didn’t have that good a zoom. I was surprised to be told I’d won.”

Buoyed by her success, she has continued to photograph nature over the summer, snapping bluebells, chickens in her garden and her family’s dogs.

“There are some doves that land in the garden and I like taking pictures of them,” she said. Her mother Sophie said: “During lockdown we had lots of walks and it was bluebell season and so very colourful.

“Violet kept picking up my phone and taking photographs of the woods and bluebells.

“We have got some chickens in our garden and she photographed them too. We had these huge dragonflies in the pond and she ran out and snapped away.

“When I saw the competition on Facebook, I said to her, ‘Why don’t you enter?”

Mrs Dix said her daughter was excited to have won and the family went to the museum at the weekend to see her picture on display.

Violet also received a camera as a present fron her parents.

“She is really creative,” said mrs Dix, “She’s good at art and acting and she is always drawing, taking photographs and making videos.

“The competition made her very aware of the colours outside so I think it was very clever in that way. We would stop the car if she saw a pheasant in a bush.

“Lockdown really encouraged children to get outdoors, which is a good thing. We lived in London a few years ago and sometimes I miss that but during lockdown I felt so grateful to be here.”

Michael said he photographed the allium sphaerocephalon in his garden in Henley in July.

He said: “It just looked beautiful and was a really good colour. I just used an iPhone to take the picture. I tried to get the perfect angle.

“I felt quite surprised to win because I haven’t won anything like that before.”

Michael visited the museum last month to see his photograph in the exhibition.

“It felt quite exciting,” he said.

The runners-up were Jessica Dingle, seven, of Sacred Heart Primary School in Henley, Orson Jones, six, and Fleur Wood, 11, both of Trinity primary in Henley, Daisy Holmes, eight, of Valley Road Primary in Henley and Serena Chilvers and Lara Wood, both 13, of Gillotts School.

Helen Cook, head of learning at the museum, said: “We were thrilled to have so many entries of such a high standard this year.

“The theme really inspired Henley’s young photographers and it was wonderful to see how wildlife provided such an important escape in lockdown.

“Thank you so much to everyone who entered their photographs — we have some very talented budding photographers in our community.”

The pictures by the winners, runners-up and highly commended entrants, along with a selection of other entries, are on display in the Discover! Gallery at the museum until November 1.