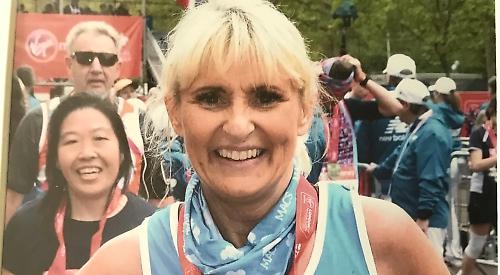 A HAIRDRESSER who has overcome breast cancer for a second time will take on the London Marathon virtually on Sunday.

Kelly Hargreaves, 54, of Newtown Gardens, Henley, will run 26.2 miles from Windsor to the Three Horseshoes pub in Reading Road.

She will be accompanied by her husband Ian, 57, a landscape gardener, with whom she has completed the real event twice before as well twice on her own.

The marathon was due to be held in April but was postponed to October due to the coronavirus pandemic and then cancelled. The organisers asked the 45,000 entrants to plan their own routes instead.

Mrs Hargreaves was first diagnosed from breast cancer in 2015. She had a lumpectomy and radiotherapy as part of her treatment and recovered within a year.

She received the news that the disease had returned at the beginning of lockdown in March and had identical treatment.

Mrs Hargreaves said: “It has been quite traumatic but my cancer was dealt with very quickly and I was back to normal.

“You just have the operation and all of the follow-up was done over the phone. They removed the lump and I had a week of radiotherapy but it was caught very early this time and it was tiny.

“In a way, the pandemic helped me out because it was so quiet in the hospitals I think if it happened now it would be a slightly different case. It probably happened at the right time.

“I managed to lose some weight and we trained really hard during lockdown, going for long runs.”

She hopes to complete Sunday’s run in four-and-a-half hours, which would be a personal best.

Friends will be stationed at various stages on the route to cheer on her and her husband.

The couple are hoping to raise £1,500 for MACS, a charity which supports children born with under-developed or no eyes.

Mrs Hargreaves said: “I’m really pleased that Ian could do it with me because he didn’t get a place for the marathon.

“We crossed the line together both times we did London before but if I’m really honest he is probably faster than me.

“I’ve been training since January and then we went into lockdown, so I was fully fit and ready to go and then the marathon got cancelled.

“Mentally it is tough, particularly when you are raising money for charity because it is not fair for people to sponsor you when you don’t even know if it is going to go ahead.

“People have been very generous and we’ve had no end of support from friends and family and clients of mine, so we are very happy.

“I am up to £950 of my target but the more I can raise the better. All charities have suffered this year and they’ve given me a place automatically for next year.”