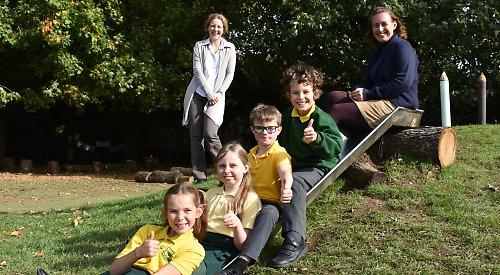 A NEW play area costing almost £17,000 has been unveiled at Valley Road Primary School in Henley.

It includes a tunnel, slide and giant coloured pencils made from timber reclaimed from the school’s old equipment.

There are also tyres for the children to play with and tree trunks to balance on.

Bark chippings have been scattered in an area that previously became muddy after heavy rain and a path leads to the new equipment.

New trees and shrubs have also been planted.

Money was raised by the school’s parent-teacher association and match-funded by a company, with the Henley Municipal Charities contributing another £2,500.

The work was carried out over the summer.

Mrs Herbert said: “We had some equipment that was failing and the whole area was just a bit tired and needed a revamp.

“We’re quite a ‘green’ school so rather than plonking another set of play equipment here, we thought we would develop the whole area.

“We’re delighted with it. It’s lovely to see the children happy and running about using their imaginations.”

Headteacher Tim Coulson said: “We wanted to do something different that would stimulate the imagination of the children.

“If they are happy, they will learn and that’s central to our ethos.

“They have been thinking of a million games with the things that are there.”

Mr Coulson said the school could have four classes outside at once while adhering to covid guidelines, adding: “We have a semblance of it still being a school.”

Charlotte Miles-Kingston, a trustee of the Henley Municipal Charities, said: “The idea is to support things they can’t get funding from the Government for.

“The wonderful thing about an outdoor area is it supports the mental health and physical and emotional wellbeing of the children, which this year has turned out to be more vital than ever.”

Pupil Frances Sadler, nine, said: “It’s amazing. I like the tyres and we can do lots of things with them like roll them down the hill.”