England’s world cup hero back to where it all began 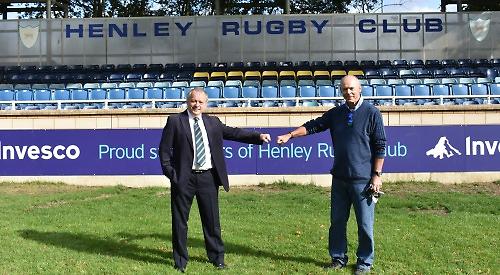 A FAMOUS face returned to Henley Rugby Club this week.

Sir Clive Woodward, who coached the Henley Hawks 30 years ago and went on to manage England to World Cup glory in 2003, was back at Dry Leas to speak about the impact of coronavirus on community rugby — the club can’t play any matches until January at the earliest.

He was given a guided tour by club chairman Chris Nixon and saw just how much it has changed since was he last there in 2004, the year he was knighted.

That was to unveil its new Tiger Turf pitch, which was replaced this year with a blue 4G pitch costing £127,000.

Since then, the clubhouse has been refurbished at a cost of £475,000, which included a new kitchen and a bar extension.

Sir Clive, 64, who now works for ITV Sport, was shown the new changing rooms, the Love Fitness gym and Physiolistic’s therapy rooms before sitting down for a coffee with Mr Nixon to reminisce about Hawks players of the past.

Henley were a club going nowhere until Woodward arrived as the 1st XV coach in 1990.

His introduction of the “flat ball” philosophy was a pioneering event for British rugby and brought promotion for the Hawks in 1992.

Henley gained a further promotion in 1994 to the National Leagues and, after Woodward departed to coach London Irish, they continued to play fluid rugby and two further promotions
followed.

Sir Clive said: “I had four great years here. It was an important time for me as it’s where I started.

“I couldn’t have had more energy here, though it seems like a lifetime ago.”

He said he remembered the old clubhouse as being lot smaller when he was coach and asked if the club still used the six pitches off Marlow Road, near the River Thames, which Mr Nixon confirmed it did.

Sir Clive said he was pleased to see that the club was coping well despite the season being brought to a halt due to the coronavirus and with no matches.

He also joked about a signed shirt he had donated to the club.

“I could’ve sworn I gave you a shirt,” he said. “People have told me they’ve seen it, so someone has got my shirt.”

And when Mr Nixon offered his guest a gold membership to the club, Sir Clive responded: “I’ll think about it — I need to try to find my shirt first!”

The chairman said: “He is a true rugby great and obviously being a past director of rugby at our club it was great and important to have him visit.

“I think he was really quite excited and impressed with the club and from that point of view it was great.

“He was so sociable and approachable. We want to thank him for his time — we all found it quite inspirational. Hopefully, we can form a good relationship with him going forward.”

Sir Clive, who lives near Maidenhead, also revealed that in fact he often returns to Henley incognito, explaining: “I come quite a lot. It’s a nice place to walk my dogs.”